Reminder: Ryan Adams and Bryan Adams are not same guy 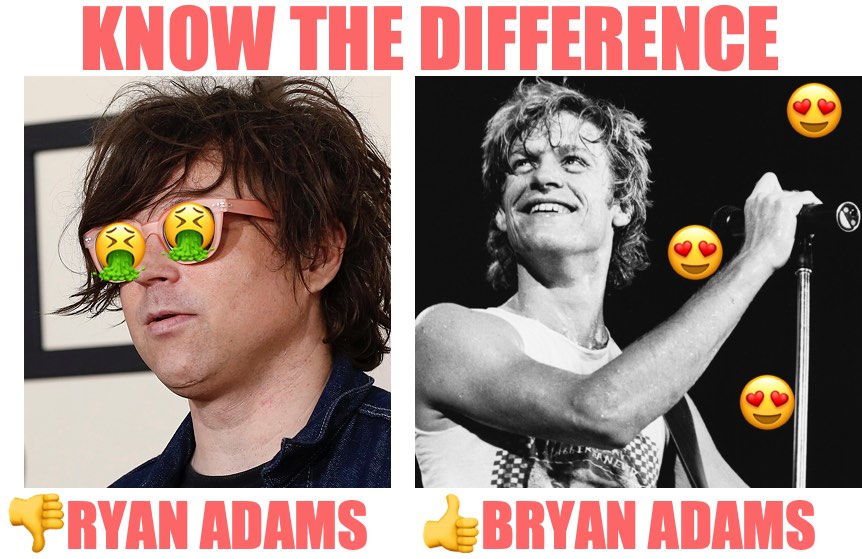 One letter different, but a world apart.

So, Bryan Adams is the '80s MTV pop star your trusty Gen-Xer blogger grew up listening to and watching. He's this guy. Here's one video, here's another. He's great!

Now, Ryan Adams is this guy, below. Not great.

Ryan Adams is accused by multiple women, recording artists and others, of being a self-confessed “like R. Kelly” sexual predator whose predations include a minor.

Ava was 14. She played bass, and she was serious about it.

Their conversations were on and off, but a constant theme was Adams fretting about Ava’s age — and asking to keep their exchanges secret — while also indulging in sexual scenarios.

“I never see pics of you anymore,” Adams wrote in November 2014, when he had just turned 40 and Ava was newly 16. “You were blowing my mind.” He had pet names for her body parts.

Days later, Adams expressed anxiety: “If people knew they would say I was like R Kelley lol,” he wrote.

Yet within 10 minutes, the conversation again turned explicit. “I just want you to touch your nipple,” he texted, before again asking about her age. “And tell me that your mom is not gonna kill me if she finds out we even text.”

In response to Adams’s repeated pleas that she tell him she was 18 — “You have to convince me,” he wrote — Ava at times said she was. Sometimes he asked to see identification — “in the hottest way that has ever been done Lol.” She never showed him any ID.

There are multiple witnesses, and the story is credibly reported.

This little ditty from Devotchka’s 2018 album This Night Falls Forever, is both beautiful AND timely. The masks. The coming storm. the promise to be there for one another. Love it. Image: YouTube