#Grombre thoughts: Why many women are going grey 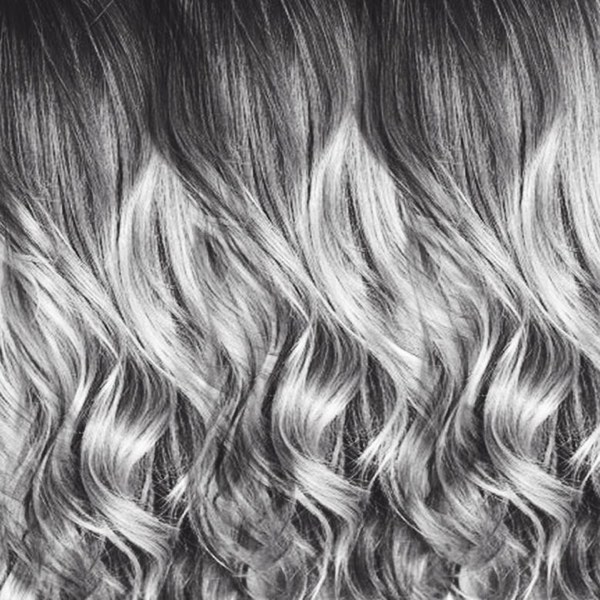 The social media-driven #grombre movement celebrates the natural phenomenon of grey hair (and silver, salt-and-pepper, white, and so on).

I recently stumbled on the #grombre hashtag on Instagram, and ended up making the decision to grow out my white/grey/gray/silver/whatever? roots, myself.

I know it sounds like a trivial, silly thing, but hear me out. “Cover your roots” is a thing women (and now men!) hear all the time, and take for granted. Who really cares? Will I feel differently about myself if I stop? Do I do this because the world around me tells me that older women are useless and unattractive?

“My hair [has] been going gray since I was 32 and I just realized that having this kind of natural hair is a thing that we women can do without shame and my mind is exploding,” I wrote on Twitter this morning after thinking about it a few days, and scrolling through a lot of gray-haired womens' selfies. “I’m doing it.”

I wrote a few more thoughts about it on Twitter, and a lot of other women responded in ways that surprised me.

Below, my tweets, and some wonderful embracing-your-grey images and thoughts from others.

My hair is been going gray since I was 32 and I just realized that having this kind of natural hair is a thing that we women can do without shame and my mind is exploding. I’m doing it.

The big thing that changed my mind was following some Instagram accounts where “regular” women, not models, not a product— who have realized this are showing pics of gray roots as they grow. I’ve never experienced a phenomenon like this on social media before and it’s really cool

It just never occurred to me. Many of the women in my family began going gray in their 20s or 30s, it was just always a thing that we always knew we had to hide. Such a silly thing, but the realization is so freeing!

The big mindblowing moment happened for me on Saturday. I just started poking around the #grombre hashtag on IG and 5 hours later my boyfriend asked me what I was still doing and I told him and he said oh it’ll be beautiful and I cried.

The responses to this thread are consistent with what I have experienced as I share my personal decision with close male friends and my partner. Men are uniformly supportive of it. Women are extremely uncomfortable with it. Socialization runs deep

Another thing that’s been special about watching this on social media: this is one “beauty trend” in which black, Asian, Latinx, and indigenous women (and other genders! But right now this is about women) can and do participate.

The one thing no one wants to be is an “old lady.” Because everyone knows that little old ladies, elderly biddies, grannies, are dismissible, powerless, invisible, make no impact on the world. A simple thing like hair color can flip that narrative internally in a powerful way.

I started going gray when I was 14. Embraced it in my 20s but then dyed it black for 8 years. I’m growing it now, since Nov! Fav #grombre accounts on IG: @ silvergirlmx, @ prettyshepherd, @ littlespottedfawn. They help me to stay committed through this awkward process! pic.twitter.com/pv5Frtaxz1

indeed. i've been getting white hairs for years. it's just a part of getting older. when my mom finally stopped coloring her hair i was so proud of her (and it looks so cool in its white/gray ombre-ness). https://t.co/WLQ7mj6pUr

I'm 50 and my hair is not yet going gray and I find gray hair really beautiful so I'm sort of bummed.

I dig my gray. When the first strand appeared I was 26 and I thought, fuck, this is it. It’s all over. But it’s been a nice gradual ride — like rings on a tree. And now I’m color coordinated with my blue-point Siamese.

First greys at age 16. I'm 48 and have grey shaved undercut and an asymmetrical pink punk cut over it. I embrace my old ladyness. Of course, growing up with Mrs Slocombe as a role model of what that can mean certainly helps. ? pic.twitter.com/4Dxp46IOyQ

Welcome, sister. #ownthecrone There is deep subversive power in it. pic.twitter.com/K7zAWQ8C9o

Who will I be when I am not blonde? I know it‘s superdumb, and yet... Aging is a gift, but owning that takes courage in a society that values youth as much as ours.