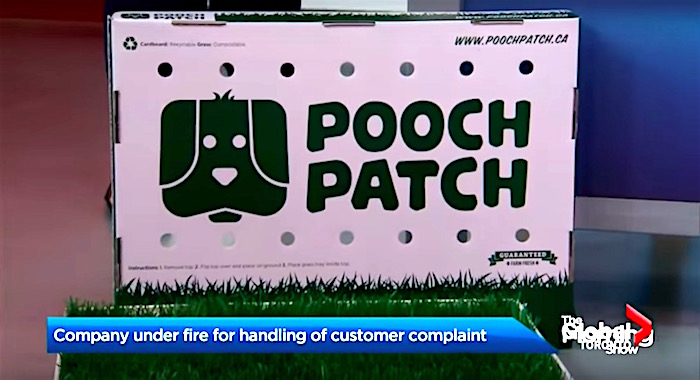 The president of a company called Pooch Patch, which sells tiny patches of grass meant for dogs to do their business on, was not pleased when one of his customers, Vanessa, returned the product. Rather than give her a refund, he emailed her and called her "Fatty McFat-Fat."

This was after she wrote a negative review about the product on Google. The president, who signs his letters "Adam & Shanks (The Border Terrier) told Vanessa that he looked at photos of her online and that he thinks she's chubby.

"Looking a little chubs in that profile photo!!!"

When she told him she reported him to Consumer Protection Canada he said, "lol Ooo so scared chubby wubby. I reported you to Jenny Craig."

Vanessa then got a threatening legal letter, but when she researched the lawyer, Alyssa Steiner, she realized there was no such licensed lawyer in Ontario.

When Global News contacted Pooch Patch for a response, their first reply was "Hahahahahhha hahahahahahah. I'm dying. This is pure gold. Pure gold!..." But later a manager tried to wiggle out of their outrageous behavior by pointing to the call center in India that they use. Customer service at its finest.

Starbucks has apologized after two Riverside County sheriff’s deputies reported that baristas ignored them when they waited to place an order. This comes just a couple weeks after an Oklahoma Starbucks employee was fired for printing the word “PIG” on a police officer’s hot chocolate order label (above). And back in July, a Starbucks barista […]