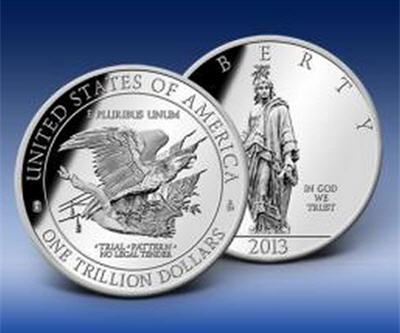 "First they ignore you, then they laugh at you, then they fight you, then you win" -- Gandhi's aphorism neatly describes the trajectory to date of Modern Monetary Theory, the latest incarnation of "chartalism," which holds that money comes into existence through government spending, and is taken out of circulation when the government taxes it back -- which means that without government deficit spending, there is no money, and which also means that the government doesn't have to fund its operations through taxes, but rather, it can issue as much currency as it needs to operate, within limits.

The limits are key to understanding MMT: the traditional account of deficit spending is that it is inflationary, because as the government issues more currency, it dilutes the existing supply, pushing up prices. But MMT says that inflation only occurs when government spending competes with private spending for the same labor and resources. If all the plumbers are working as hard as they can and the government prints a bunch of money to start a new nationwide plumbing initiative, then it will be bidding against anyone who needs some plumbing done for those plumbers' services, pushing up prices.

But if there is a bunch of excess capacity in the economy -- factories running below capacity, skilled people who want to work sitting around idle -- then the government can buy up all that excess capacity without competing with private spenders and employers, creating full employment and broad, shared prosperity. And when full employment is attained, the government can prevent inflation by taxing some of the money it issued out of existence.

MMT is an economic response to austerity, which has been a catastrophic failure everywhere it has been tried, creating misery, stalling growth, and wiping out the hopes of whole generations.

There are some important limits on MMT: first, it only works if you're a sovereign state issuing your own currency. This doesn't apply to cities, provinces, or countries in the Eurozone (whose power to issue currency is limited by the European Central Bank). MMT only works for countries whose debt is issued in their national currency: if your country borrows in a currency other than its own, then printing more money won't help service that debt.

MMT is a theory that's gaining traction, and it's also (predictably) attracting a lot of criticism. Some of this criticism sounds plausible to me -- like the people who say that central banks issue currency but politicians tax it out of existence again, and politicians hate raising taxes, so getting elected officials to head off inflation might be an intractable political problem.

But the criticism of MMT is often badly thought through, or in bad faith, or reactionary, or all three, and that's where Forbes's John T Harvey comes in: Harvey has written an extensive, easy-to-grasp rebuttal of recent attacks on MMT from the likes of Paul Krugman, Lawrence Summers and Kenneth Rogoff, pointing out the flaws in their arguments, and the places where they're not making arguments at all -- Summers, for example, simply waves his hands at MMT proponents and calls them "fringe economists" without substantively engaging with their arguments.

The Core Problem to be Solved

1. There is no reason to expect the private sector to provide a job for everyone who is willing to work. Indeed, for the private sector, labor is a cost that needs to be minimized. This isn’t a criticism, it’s just the incentive structure to inherent that part of our economy.

2. We have the ability to produce goods and services on a level never before seen by human society. There is no logical reason anyone (e.g., the unemployed) should have to go without. It is immoral.

3. Just as the President’s daughter said days ago, people like to work. Quite right.

4. Money is not scarce. Both the private and public sector create it with a keystroke. The mechanism by which each works is different, of course.

5. In the public sector, because for all intents and purposes, the treasury and central bank act together, the government finances itself through money creation. This happens every day and is nothing new.

6. Unlike money, resources are scarce and the only true limit on our ability to produce goods and services in both the private and public sector. We cannot, for example, do something that would require us to double the number of Americans working. There simply are not that many people in the workforce. We could finance it, so to speak, but we couldn’t really do it. It’s unrealistic. There are things we cannot do.