Shadows: Amsterdam - a game where you guess what the other people are guessing about ambiguous pictures 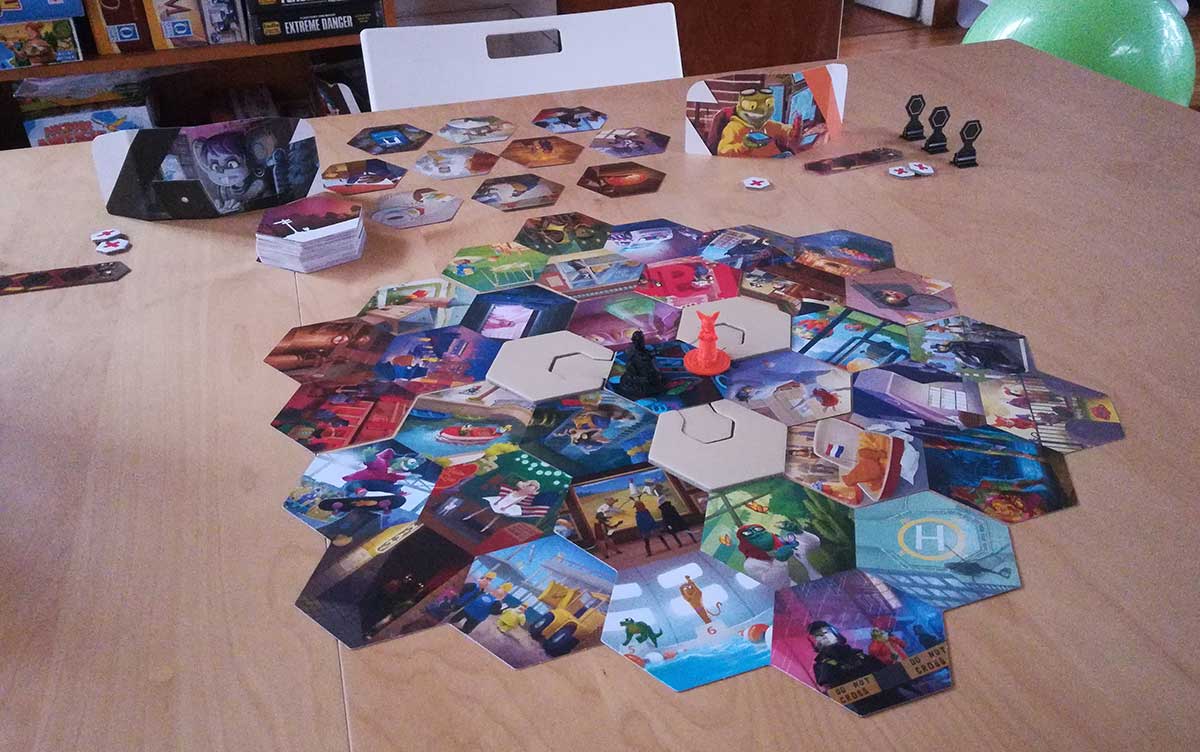 Shadows: Amsterdam (Libellud, 2-8 players, ages 10 and up) is the newest entry in the micro-genre (that includes Dixit and Mysterium) of “guess what the other people are guessing about ambiguous pictures” games.

The ambiguous pictures, in the case of Shadows, are a multitude of charming, somewhat dark paintings of what is best described as a furry-noir Amsterdam-by-way-of-Zootopia. Anthropomorphic animals tend tulip fields, enjoy clog dancing, and take romantic selfies, but also lurk in doorways, bribe officials, discover bodies, and brood menacingly in the 150 or so images that make up the game’s board and deck of cards.

Thematically, the game is a race between teams of private eyes (or as one team against the clock) to solve an unspecified mystery by navigating your team’s pawn to the locations of clues while avoiding locations with police. These locations are marked on a map visible only to each team’s “dispatcher,” whose job it is to give the clues to their teammates.

The dispatcher guides their team by silently handing them cards from a face-up pool of 10, and the team’s job is to figure out from the picture where it is the dispatcher wants them to move. The meat of the game lies in the fact that most of the pictures aren’t really that similar, or alternatively might be equally good/terrible matches to multiple spaces for different reasons. Does the baby raccoon in the stroller match the panicking scientist behind the biohazard door because they both have big eyes? Or does it match the chicken fingers and fries in the cafe because that’s what he’s going to want to eat?

The puzzle gets thornier when the dispatcher gives out two cards -- that means the team must move two spaces, drastically increasing the number of possible destinations and the chances of landing on one of the three-strikes-you-lose police spots.

At its heart, Shadows: Amsterdam is a game about theory of mind -- success lies in grokking what aspect of the cards is likely to spark an association in your teammates. Is it the color? The theme? The mood? The number of characters on the card? Their species? Sometimes the clue-giver won’t be able to guide their team by the most direct path because the available clues simply don’t match well enough. Beyond that, people see the world -- and interpret the pictures -- differently. In one game I missed a clue because where I saw a picture of Godzilla terrorizing a city in the background, the dispatcher was looking at the bowling alley in the foreground.

Shadows works well as a party game, since it’s simple, frantic, and silly in team vs. team mode; and as a more cerebral co-operative puzzle with 2 or 3 players. It can be a bit fragile as the dispatcher has to maintain a poker face in order not to give unfair amounts of information, but it’s been equally well-received around here with groups of both kids and adults, and it gives you some interesting insights into how others interpret the relationships among the images they see.