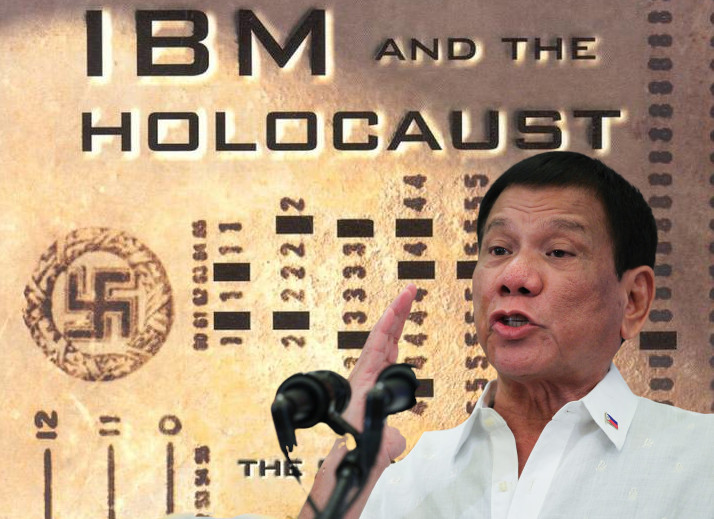 During the long years when Philippines strongman Rodrigo Duterte (previously) was mayor of Davao (circumventing term limits by periodically allowing his daughter to run for mayor and serving as her vice-mayor) the city was terrorized by death-squads who enjoyed total impunity as they assassinated police suspects and Duterte's political opponents, while Duterte cheered them on (Duterte has boasted about his participation in extrajudicial killings during this period, but has also denied participation in the death squads).

In 2012, IBM signed a multi-million-dollar deal to supply high-tech surveillance gear to the Duterte regime, a program that IBM boasted of when attempting to sell surveillance gear to other cities. IBM also produced sales literature boasting of having sold its "Face Capture" facial recognition program to the city (the city's promotional material also features police using this tool), though now IBM claims it never supplied facial recognition tools to Davao.

Davao's death-squads murdered scores of street children, petty criminals, and suspected gang members. Often, these victims would be slain shortly after being released from police custody. One police official, Antonio Boquiren, boasted that IBM's tools let them arrest people for the pettiest of crimes: "Whether it’s criminality, smoking, or jaywalking, any violation of ordinance is a crime and a police is sent."

IBM is notorious for supplying the Nazis with the tools needed to track the mass-slaughter of Jews, homosexuals, Catholics, communists and dissidents in the concentration camps, through an ongoing relationship that included servicing and supplying these systems throughout the camps' operation, directed from IBM's New York offices.

Today, IBM claims that it is "committed to high standards of corporate responsibility."

Despite reporting by Human Rights Watch and local papers, Shinde claimed that the human rights allegations against the Duterte regime were “not in the news at all during those days.” There was “nothing said like that about him at that time,” he continued, pointing out that IBM contracted with Sara Duterte, not her father, who, he said, “didn’t have such a kind of record.”

Yet when IBM agreed to work with the Duterte family’s administration in 2012, his regime’s support of extrajudicial killings in Davao City had been well-established; as early as 2009, he had described criminals as “a legitimate target for assassination.” In 2012, the year IBM signed the deal with Sara Duterte, local human rights activists claimed to have documented 61 death squad killings.

According to IBM documents and law enforcement officials, the Philippine National Police also received information from the surveillance command center. Before the IBM deal was signed, the Philippine National Police had also been criticized for failing to investigate death squad killings, and since Duterte became president, it has played a role in the deadly national “war on drugs.”

“If they had the technology then, I have no doubt that they used it and continue to use it to locate the targets for elimination,” said Picardal, formerly of the Coalition Against Summary Executions. “And not only drug users but human rights defenders, activists, and anyone they consider as enemies of the state.”

The editors of Guardian Cities (previously) saw my Toronto Life blurb about how a "smart city" could be focused on enabling its residents, rather than tracking and manipulating them, and asked me to write a longer piece on the theme: The case for ... cities where you're the sensor, not the thing being sensed is […]