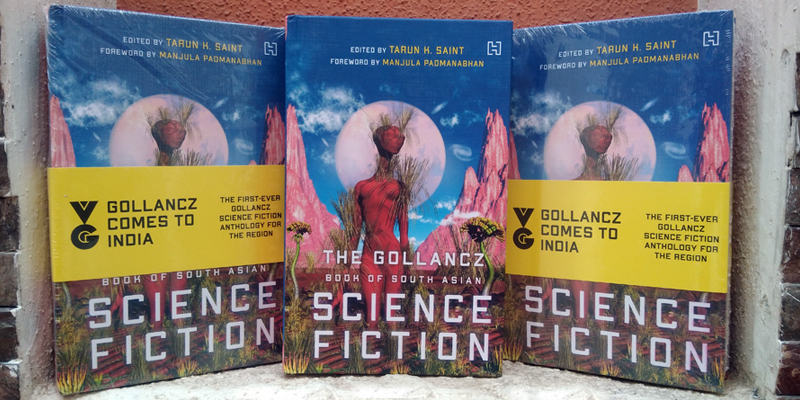 South Asia is a hotbed of brilliant science fiction writing, as well as writings in all the related genres capture by the Bengali word "kalpabigyan (encompassing literature that is "science-dependent," "science-based," "science mystery" and "science"), and there have been many brilliant anthologies of science fiction from the region; the latest entry to the field is Gollancz's new Book of South Asian Science Fiction, edited by Tarun K. Saint, the subject of a fascinating review by Gautham Shenoy in Factor Daily.

The anthology includes "Planet of Terror," written by Adrish Bardhan, who is credited with coining "kalpabigyan," as well as 27 other stories and poems (and by all accounts the poetry is outstanding).

Shenoy finds fault with one element of the book though: it only features writers from the "partitioned three" (Pakistan, India and Bangladesh), with no contributors from "Sri Lanka, Nepal, Bhutan, the Maldives or the Tibetan Community in exile." Shenoy calls on Gollancz to revisit the book as a series with contributions from these other nations and literatures.

Meanwhile, elsewhere in the anthology, Sami Ahmad Khan returns to his fictional universe featuring the antagonistic reptilian aliens, the Qa’haQ, with his standalone story, 15004, with a tale with a very high body count brought about by an invading species which seeks to eliminate heterogeneity in India, for starters. The people of Karachi grapple with the sea stolen from them and its consequences in Asif Aslam Farrukhi’s Stealing the Sea (Samandar Ki Chori; Translated from by Syed Saeed Naqvi), while a family comes to grip with their past, their expectations and their heritage in unexpected fashion and with unintended consequences as enter an immersive VR theme park called Partition World 2047 in the story by this collection’s editor and partition scholar, Tarun K. Saint. Clarke Prasad (aka Suraj Prasad) in his story, Mirror-Rorrim portrays a bhumandala couple in a quantum-entangled multiverse. And speaking of time, Manjula Padmanabhan in her first contact story, Flexi-Time gives readers a glimpse at the implications of IST (not Indian Standard Time, but Indian ‘Stretchable’ Time) as an impatient global council tries to come to grips with the “chronological otherness” of the aliens, while Anil Menon’s story, Shit Flower, touches upon what immortality and multiple identities could be like against a future Bombay facing a brownout by way of a sewage flood, brought as a result of AIs telling themselves jokes. Capping the anthology is a climate fiction story about the language of Gaia herself – which in itself is worth the price of admission – by the author of Ambiguity Machines and Other Stories, Vandana Singh, Reunion which is at once a meditation on where the future of cities and urban living lies in the context of a sustainable future and set in a climate-world world where Mumbai has become an archipelago. All of which makes this anthology a book worthy of being on the shelves of any reader who enjoys good stories – SF or otherwise.