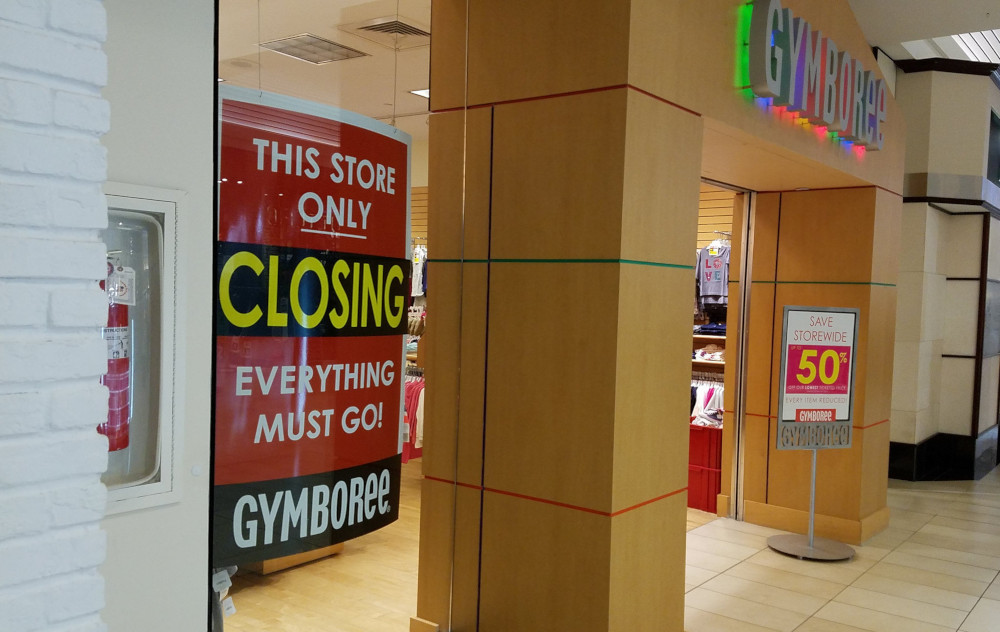 Gymboree is one of the many companies acquired by Mitt Romney's Bain Capital, through a "leveraged buyout" through which the company was loaded up with debt so that the hedge fund could cash out; the company was left with massive debts and cycled through a succession of incompetent, inexperienced grifter CEOs who eventually ran the company into bankruptcy.

As the company was going through bankruptcy, the board decided to exercise an obscure clause in its contracts to "terminate the severance plan," for all but a handful of favored execs on the leadership team (that is, the people who drove the company into bankruptcy). By doing this, the company was able to fire longterm employees who had stayed on in the runup to bankruptcy despite the obvious warning signs because they had been hired with the promise of generous severance.

One of those denied severance was Mera Chung, who was recruited to work at Gymboree by her former boss from Old Navy, where she had been a vice-president. Chung was promised control of Crazy 8, Gymboree's most successful brand, and even though she could see that the company was headed for insolvency, she stayed on the job so that she could continue to pay her household bills, which included the costs of caring for her elderly and infirm mother; Chung assumed that her contractually promised one-year severance would kick in if the company folded and that she would have a cushion while she sought other employment.

Instead, she was given no severance -- but watched as colleagues more favored by the company's board and its lead creditor, Goldman Sachs, were given secret severance payouts in the form of "retention bonuses" that nominally ensure that key personnel were available to ensure an orderly wind-down. Incredibly, at least three of Chung's "essential" colleagues who were given these bonuses immediately left for a luxurious vacation at the Sundance Festival, begging the question of exactly how essential they were.

Chung was an executive, but there were also 10,000 clerks at 800 Gymboree stores who have been denied severance thanks to the financial shenanigans of the hedge funds, financial engineers and investment bankers running Gymboree.

There's a class-action suit brewing over this, but that will be a long process with an uncertain outcome. In the meantime, a productive company full of talented and loyal workers has been liquidated in order to enhance the personal fortunes of a group of grifters who -- incredibly -- style themselves as "job creators.'

Ron Tyler, a friend of Chung’s and a law professor at Stanford, provided her with several legal contacts. “I think her devastation comes from the fact that she, after very carefully and persistently creating this extremely successful career, to have it end so dramatically and intentionally by her company,” Tyler says. “And she saw the writing on the wall. Had it not been for that [severance] agreement, she would have left before.”

Shortly after the bankruptcy, Chung felt an even deeper sting. One of the lawyers she consulted asked how many employees worked at Gymboree headquarters, and so Chung put the question to Lu. “She was laughing and said, ‘I’ll call you when I land, I’m going to Sundance,’” Chung says. Chung wrote to the trustee that Lu and three other members of the executive leadership team — Tricia Lesser, Shelly Walsh, and Parnell Eagle — had decamped to the Sundance Film Festival, weeks after being given a retention bonus to stay on at Gymboree. Thompson corroborated that Gymboree executives were at Sundance, though she didn’t name names.

Pictures from Lu’s Facebook account, since removed, place her in Park City, Utah, at the time of the film festival. One check-in still on Facebook places her there as well.

“It’s like a B-grade Netflix movie,” Chung says. “If they were so needed for retention, why were they able to go to Sundance?”

“She Lied to My Face”: Inside the Hectic Last Days of Gymboree’s Retail Bankruptcy [David Dayen/The Intercept]