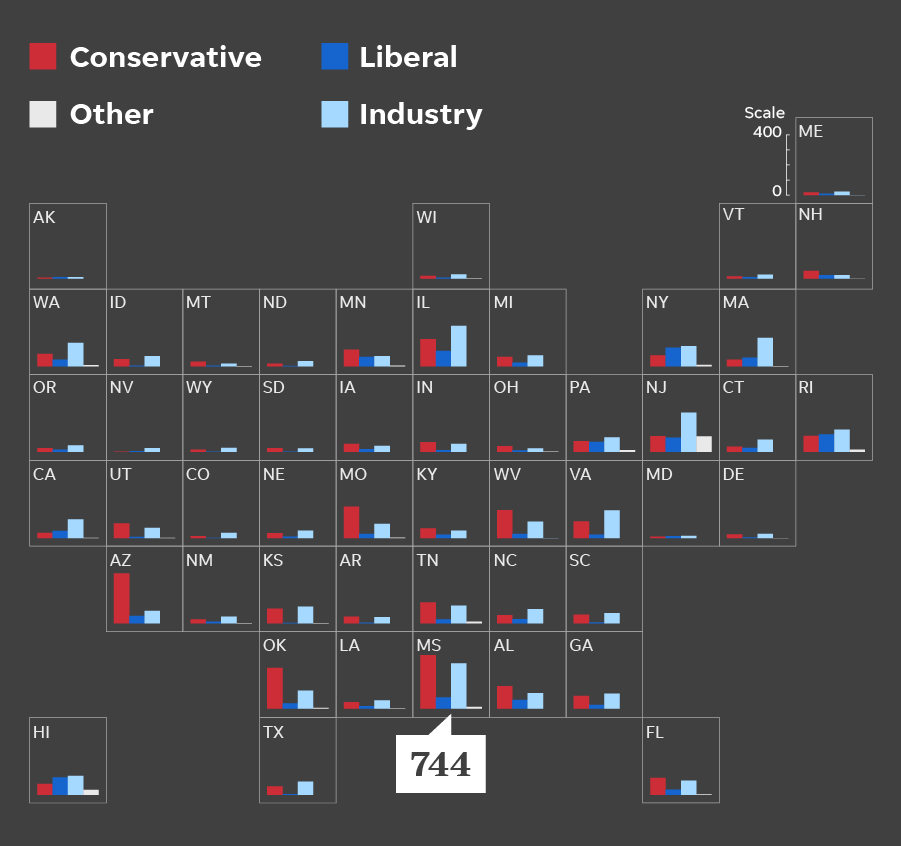 For two years, researchers from USA Today, The Arizona Republic and the Center for Public Integrity have been ingesting the bills introduced in all 50 state legislatures, yielding a corpus of more than 1,000,000 bills, and then consumed months of computer time on a large cluster, comparing these bills to "model legislation" promoted by lobbyists, using a text-mining engine that could identify paraphrases, synonyms, and other techniques used to file the serial numbers off of these bills.

Many of the lawmakers who signed onto these bills as cosponsors say they had no idea they were supporting "copycat" legislation. Though copycat bills are sometimes right wing, sometimes left wing, and sometimes about enriching a specific industry, the most common political valence of the bills is right wing, and familiar names like ALEC (previously) lead the charge.

These bills are given deceptive names ("The Asbestos Transparency Act didn’t help people exposed to asbestos. It was written by corporations who wanted to make it harder for victims"); and they are supported by an ensemble cast of "experts" who rove from hearing to hearing, testifying on the bills; they are often used to overturn local legislation (such as state laws that overturn city ordinances on Airbnb, higher minimum wages, limits on plastic bags, etc); and are a source of enormous profits for the companies that support them ("One that passed in Wisconsin limited pain-and-suffering compensation for injured nursing-home residents, restricting payouts to lost wages, which the elderly residents don’t have.").

USA TODAY/Arizona Republic found the Asbestos Transparency Act, a product of the American Legislative Exchange Council, an industry-supported model bill factory, has been introduced in at least 32 states since 2012.  It became law in 12 states.

Sonnenberg, the lawmaker who introduced it in Colorado, said he didn’t write the bill and relied on “my experts” to explain it during a February 2017 hearing.

One of those experts was Mark Behrens, who logs thousands of miles a year testifying before lawmakers about ALEC’s model asbestos legislation. He has done so in at least 13 states, where he was billed as an objective authority.

Behrens is an attorney with Shook, Hardy and Bacon, which represents companies in complex civil litigation. He is a co-chairman of ALEC’s Civil Justice Task Force and is a paid consultant for the U.S. Chamber’s Institute for Legal Reform, an arm of the nation’s largest business lobby, which has the stated goal of reducing litigation.

You elected them to write new laws. They’re letting corporations do it instead. [Rob O’Dell and Nick Penzenstadler/The Arizona Republic, USA Today and the Center for Public Integrity]