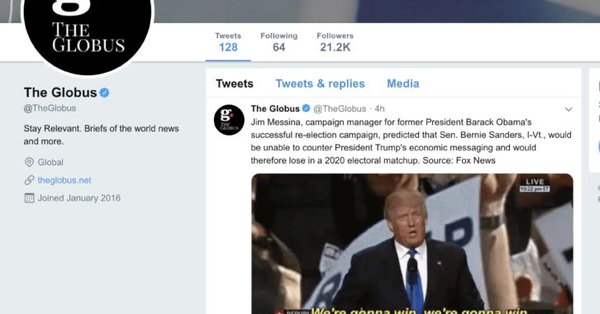 The bot network repeatedly denounced the Mueller report as a 'RussiaGate hoax.'

The social networking service Twitter says it has shut down some 5,000 accounts that were acting as automated pro-Trump propaganda bots. Before they were doing this, they were spewing Saudi propaganda, so they're presumed to be linked to the Saudi state.

Sean Gallagher at Ars Technica reports that one of the tweets the bot network distributed read, "The people screaming about Trump working for Russia are the same people demanding social media censor 'misinformation', Stop listening to these people."

Twitter has suspended over 5,000 accounts tied to a network amplifying a message denouncing the report by Special Counsel Robert Mueller as a "RussiaGate hoax." According to a researcher, the accounts—most of which had only posted three or four times in the past—were connected to other accounts previously used to post pro-Saudi messages.

In response to an inquiry by Ars, a Twitter spokeswoman said, "We suspended a network of accounts and others associated with it for engaging in platform manipulation—a violation of the Twitter Rules." An investigation into the network is still ongoing, the spokeswoman said, but no determination has yet been made about who was behind the campaign.

Trump says houses of worship 'essential,' if governors don’t obey his reopen demands he will 'override'

Trump: ‘I will override the governors’ if they stop houses of worship from reopening