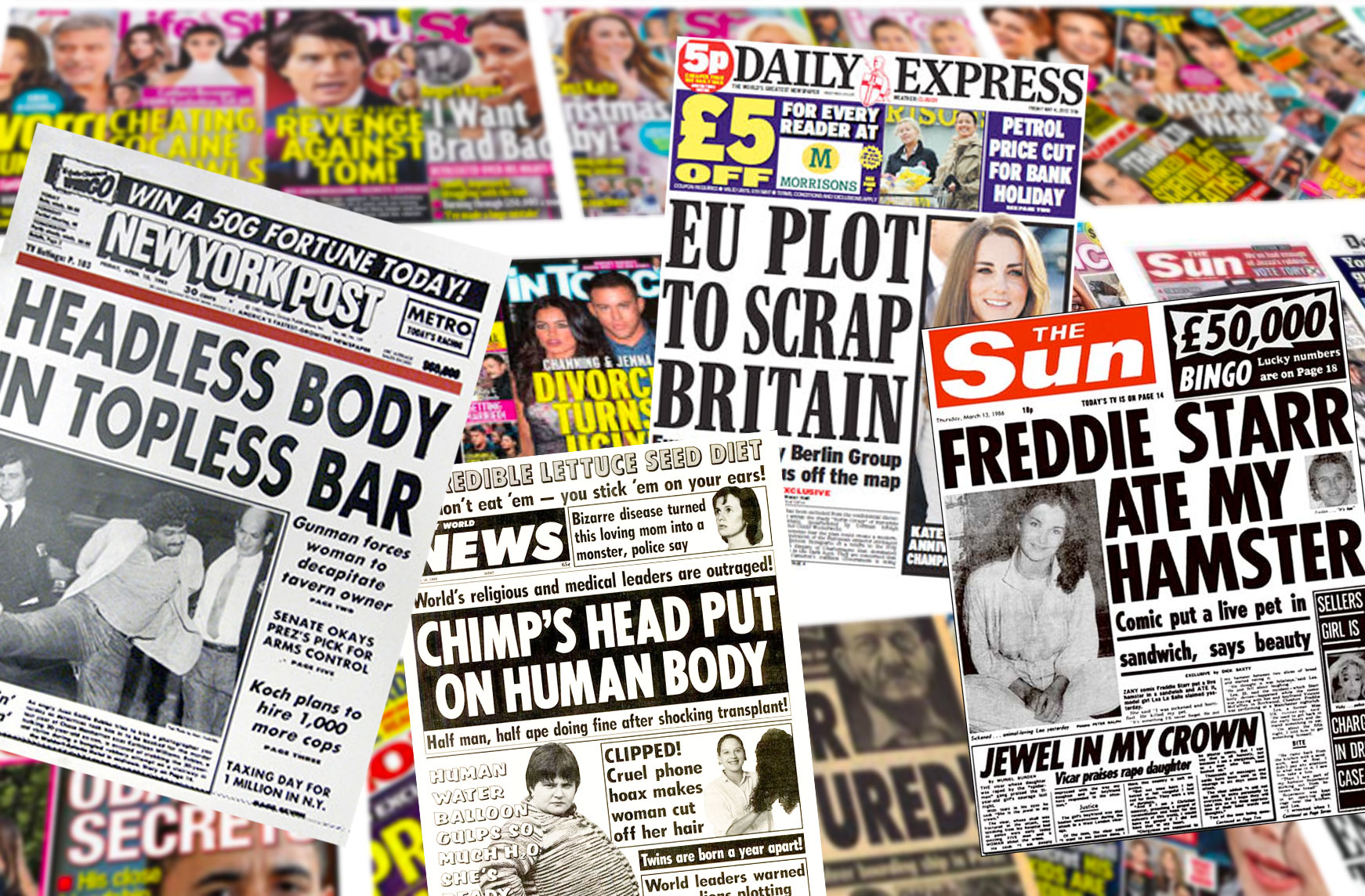 How do the tabloids have so many “Exclusive!” stories?

When you’re writing stories concocted out of thin air, which bear little relation to reality, it’s easy to have an exclusive—because no other media outlet would touch it. Angelia Jolie has little time left to live, and is cutting five of her six children out of her will, screams the ‘National Enquirer’ cover: “Dying Angie Leaves $116 million fortune to Son Maddox.”

You might think that “Angelina Jolie Dying” would be a more dramatic headline, but the ‘Enquirer’ acts as if we all know that the 43-year-old actress is living on borrowed time, and doesn’t even mention her health until the 19th paragraph.

What’s killing her? She had “successful cancer-related surgery in 2015,” the ‘Enquirer’ reports. Well that won’t kill you, especially since Jolie underwent a preventative double mastectomy before ever being diagnosed with cancer.

But there’s more: “she’s admitted to suffering from Bell’s Palsy.” Which never killed anyone: it affects facial muscles, and is usually temporary.

“Friends have also worried about Angelina’s chronic lack of self-care,” says the rag. How lethal is that? Evidently it is “prompting fears of anorexia and organ failure.” And we’re back in the realm of the wildly speculative once again, and that’s why Angie is “dying.” Right.

Is she leaving her fortune to Maddox because he “took her side against Brad” in her divorce battle with Pitt? Of course not. The other five children didn’t side with Pitt; they simply refused to take sides. Maddox was firmly Team Angie, but the others were too young to make informed decisions. Would any mother cut her ten-year-old twins out of her will because they continued to speak to their father?

“World Exclusive” proclaims the ‘Globe’ cover above its story on Prince Harry and Duchess Kate: “Trial Separation Over Cheating Scandal! She takes the kids and moves in with mom.” In a word: No. Never happened. Probably the most closely-watched couple in Britain, Kate and William continue to be seen at public events together, and remain living together at Kensington Palace - a point made daily by those noting William’s reported estrangement from brother Prince Harry, who recently moved from the Palace to Windsor with Duchess Meghan.

Meghan has “put aside $500,000" and “she’s consulted with doctors” as she plans “per post-baby surgery overhaul,” reports the ‘Enquirer.’ Forget that the baby’s due any day now and she has no idea how she’ll look post-partum, but given Meghan’s passion for yoga and fitness, she seems likely to get back in Royal supermodel shape without resorting to nips and tucks. But of course the ‘Enquirer’ claims to have found a “Palace insider” who reports that “She is obsessed with the way she looks... It’s her worst nightmare to be photographed when she’s not looking her best!” Well, isn’t that everyone’s worst nightmare, right ahead of nuclear Armageddon and life on Earth being wped out by global warming?

WikiLeaks’ mastermind Julian Assange and former ‘Baywatch’ beauty Pamela Anderson are suffering a “Sex Tape Leak!” according to the ‘Enquirer.’ Anderson befriended Assange during his seven years holed up in the Ecuadorian embassy in London, and the ‘Enquirer’ reports that their visits were not only “conjugal,” but may have been “secretly filmed” by embassy eavesdroppers. So there’s no sex tape; just the suspicion that there might be. Right.

What went wrong n Adele’s happy home? “They simply grew apart over time,” reports the mag. “There’s no drama.” Well, that’s an exclusive detail worth my $5.99. How about Williams - what shattered her nuptial bliss? “The split was reportedly amicable and the two remain friends,” reports ‘Us.’ Wait, what? That’s their exclusive detail on why the marriage failed? Now I want my money back.

It’s time for ‘People’ magazine’s annual “Beautiful Issue” - the distaff version of its “Sexiest Man” issue. This year’s cover girl is actress Jennifer Garner, leading “42 pages of inspiring stars.” Hopefully they’ll inspire the magazine’s readers to be more beautiful, more famous, and wealthier, because that’s inspiration we could all use.

Fortunately we have the crack investigative squad at ‘Us’ mag to tell us that Rebecca Romijn wore it best (Allison Janney never stood a chance), that TV anchor Sara Haines once “peed my pants” in a haunted house in iowa, that Brooklyn Decker carries iced tea, lip balm and her son’s toys in her Boyy bag, and that the stars are just like us: they “go food shopping,” “they pick produce,” “they eat cereal for breakfast,” and “they eat a slice” of pizza. What is it with the stars this week: Is food all they think about? Or do paparazzi just hang around supermarkets and restaurants?