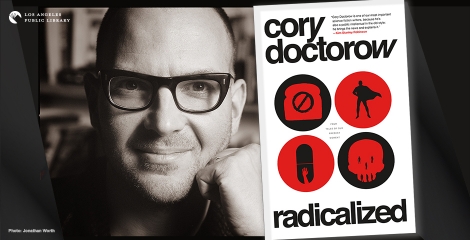 The LA Public Library's Daryl M interviewed me about my new book, Radicalized, specifically, about how my Trump anxiety (created, in part, by the platforms' relentless use of "engagement" tools to nonconsensually eyeball-fuck me with Trump headlines) led to the book's germination, as well as the specific inspirations for each of the four novellas, and the delights of working in novella form.

What was your inspiration for Radicalized as a collection?

I call this my "Trump derangement syndrome therapy book." I didn't intend to write ANY of these—they got blurted out while I was working on another book—the third Little Brother book, working title Crypto Wars, which I turned in just before Xmas.

We've spent 2+ years having Trump headlines nonconsensually crammed into our eyeballs by a media ecosystem dominated by "engagement" metrics—meaning that the longer you hang in there, the bigger the bonuses of the execs, engineers and designers behind the product. That's why Google added "trending searches" to the search bar in Android. No one EVER went to a search bar to find out what other people are searching for. People search to find out the answers to specific questions! But if a Google engineer can hijack your attempt to find out what's in an unfamiliar sauce on a restaurant menu by showing you a list reading "imminent nuclear armageddon/more kids in cages/trump supports torture" then you might actually do SEVERAL searches instead of the one you set out to do. Nevermind that this means dinner is ruined—the engineer who came up with that gimmick will get a great bonus for increasing "engagement" with their product.

The upshot of this is a kind of narrative incoherence. The headlines come so fast and furious that it feels like we're being buffeted, and there's no way to make sense of them.

When that happens, my writerly instinct is to make narratives by any means possible. That's where these stories came from, as best as I can work out.

Why did you choose to tell the stories in Radicalized as novellas rather than novels?

Novels are mysterious oceans with unknown territory on the other side. You never know where the currents and the winds will take you until you've finished the crossing. Novellas are the largest, most complex stories that can be held in your head all at once, something that can be entirely premeditated instead of something you discover.

Or put another way: a short story is like traveling with a carry-on bag, it can only contain your essentials. A novel is like hiring movers to load your whole life into a shipping container. A novella is like checking a bag or two, with enough room for some optional comfort items you're not sure you'll need but which you'll be glad to have.