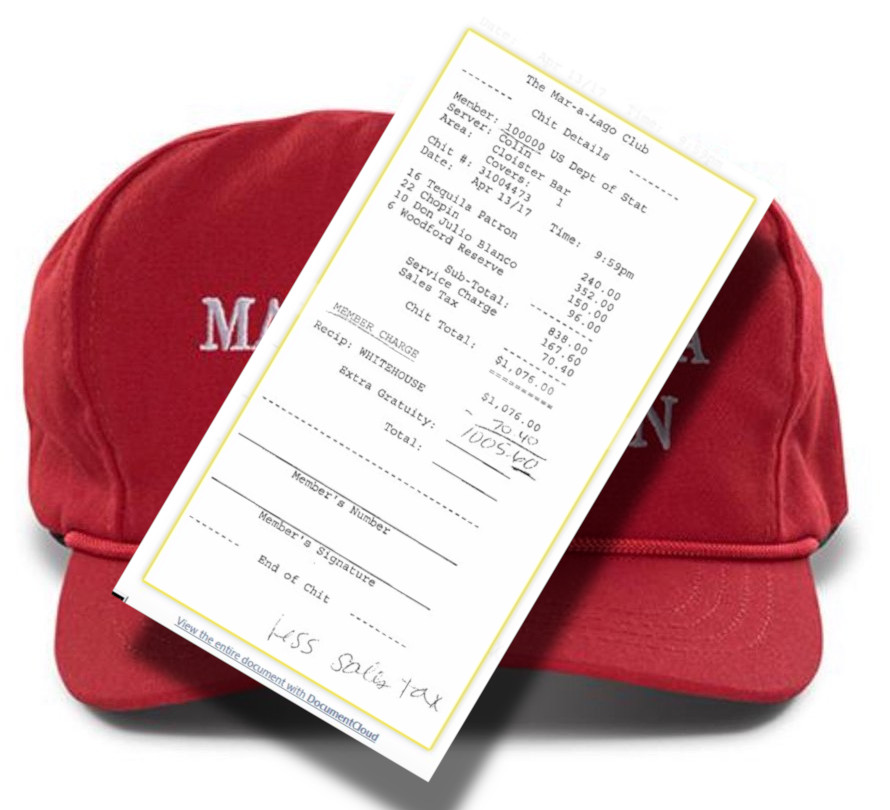 All in all, the side group rang up a bar-tab of $1005.60, for 54 glasses of premium liquor, at an average price of $18.62/drink. They charged the whole thing to the taxpayer, and when the State Department rejected the claim, Trump's White House overruled them and paid the Trump Organization.

Steve Bannon says he is a teetotaler and didn't contribute to the bar tab.

The bar tab was just for starters. That weekend, at least 24 of Trump's staffers stayed at Mar-a-Lago, violating the US government's procurement rules, which required them to stay at one of the many nearby, more reasonably priced competitors.

The Trump Organization bills the US government $546/night for each room in a Trump hotel that a government employee stays in. That's the maximum permitted under law.

The billings were revealed by Property of the People (previously), who had to sue the Trump administration to get the underlying documents; it's published on Propublica.

Six days later, on April 13, Mar-a-Lago created a bill for those drinks, tallying $838 worth of alcohol plus a 20% service charge. It covered 54 drinks (making for an average price of $18.62 each) of premium liquor: Chopin vodka, Patron and Don Julio Blanco tequilas and Woodford Reserve bourbon. Watson’s email did not specify how many people consumed the alcohol or who the participants were. (It stated that she was told the participants included then-strategist Steve Bannon and then-deputy chief of staff Joe Hagin. Bannon, who has said he stopped drinking years ago, said he didn’t drink at Mar-a-Lago and didn’t recall the episode. Hagin did not respond to requests for comment.)