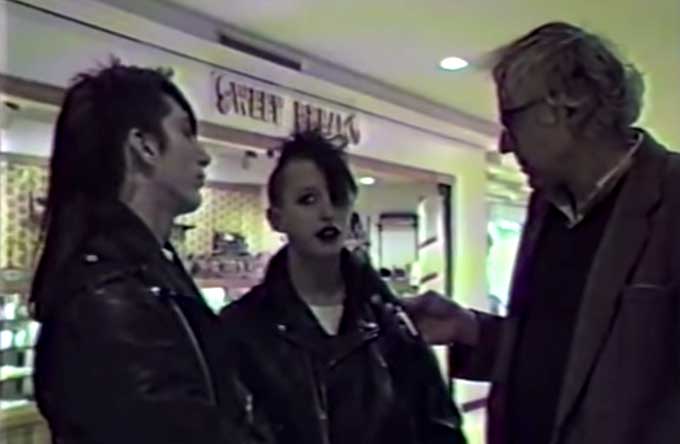 When Bernie Sanders was mayor of Burlington, Vermont, he had a cable access show called Bernie Speaks. In this 1988 episode, Sanders spoke to a couple of affable goth kids about capitalism, fashion, politics, anarchy, and society.

The episode originally aired in March 1988, and it mostly consists of Sanders playing roving reporter at the Burlington Square Mall. About halfway through the program, he starts talking with a couple of friendly punk-rock kids. He asks them what they don't like about society. They reply with a collection of complaints, some vague and some highly specific, that—speaking as someone who in March of 1988 was 17 and listening to punk rock and sometimes hanging out in malls—is as good a condensation as you're ever likely to find of a particular teenage worldview in that particular historical moment. "People are not open-minded enough," one says. "They think that in order to be stable in society you have to have money, you have to live in a suburb, you have to do the 'set' things, such as have so many people over for dinner…a week, or you're not socially acceptable. You've got to dress a certain way to be socially acceptable. And I don't believe in having to belong to anything to be a person. I can do basically what I want with my appearance, with my attitude, and it doesn't matter."

They both identify themselves as anarchists, as 1980s mall-punks were prone to do. But most people's politics are a mish-mosh, and that's true here too. One of them says he'd be happy in a communist society with "no freedom of enterprise" as long as there's still freedom of speech. The other says she's "kind of an anarchist too, but I don't believe in total anarchy, because then we're just gonna kill ourselves." Sanders plays his Phil Donahue role with aplomb, holding the mic and nodding his head encouragingly.

I wish we could find out what these kids are up to now, 30 years after this was aired.