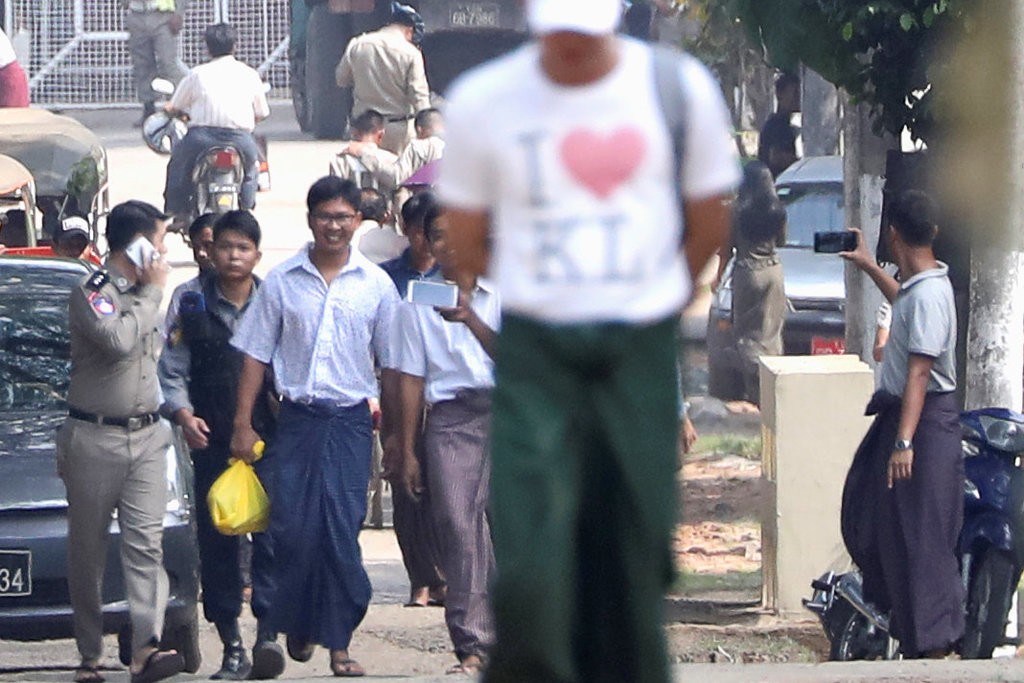 Reporters imprisoned by Myanmar since 2017 for exposing Rohingya Muslim crackdown

Reuters reporters U Wa Lone, third from left, and U Kyaw Soe Oo, to his right, walk free from prison in Yangon, Myanmar, on Tuesday. IMAGE courtesy Reuters.

Reuters reports tonight, and the New York Times and WaPo confirm, that Wa Lone and Kyaw Soe Oo, jailed since December 2017 for their journalism that exposed a massacre of Rohingya Muslims in Myanmar, have been set free by the authorities in Myanmar (Burma).

“After spending more than 500 days in prison for reporting on the ethnic cleansing of the rohingya, wa lone and kyaw soe oo are free. I just watched them walk out of the prison myself,” wrote Gerry Doyle on Twitter.

And then came the photos that showed Wa Lone and Kyaw Soe Oo walking out of from Insein Prison in Myanmar, to their freedom.

“We are enormously pleased that Myanmar has released our courageous reporters, Wa Lone and Kyaw Soe Oo. Since their arrests 511 days ago, they have become symbols of the importance of press freedom around the world. We welcome their return.” pic.twitter.com/hBYtNTNqzD

Pulitzer Prize-winning journalist Wa Lone on his release from jail: “I'm really happy and excited to see my family and my colleagues. I can't wait to go to my newsroom." Welcome home, Wa Lone! #FreeWaLoneKyawSoeOo pic.twitter.com/1IsclRHrNl

Finally free. Thanks to all who made this possible and worked to #FreeWaLoneKyawSoeOo #JournalismIsNotACrime pic.twitter.com/PxiHW3Oo30

The two reporters, U Wa Lone, 33, and U Kyaw Soe Oo, 29, were arrested in December 2017 and sentenced in September to seven years in prison under the colonial-era Official Secrets Act for receiving documents from a police officer.

The men, along with their Reuters colleagues, were awarded in April the Pulitzer Prize for international reporting, one of journalism’s most coveted and prestigious honors.

Their case had become an international cause célèbre, with journalists, human rights activists and world leaders calling for their release. Their arrest, like the ethnic conflict they were covering, was a turning point in the West’s perception of Myanmar’s de facto prime minister, Aung San Suu Kyi, who had long been seen as a force for democracy and tolerance.

Best news ever. Reuters journalists Wa Lone and Kyaw Soe Oo have just walked free from Insein Prison in Myanmar after more than 500 days behind bars. What a glorious sight to see your smiles. pic.twitter.com/lQ2aoBvMkS

“Swamped by media and well wishers as they walked through the gates of Insein Prison, a grinning Wa Lone gave a thumbs up and said he was grateful for the international efforts to secure their freedom.” Wa Lone and Kyaw Soe Oo are free. https://t.co/DLW56RppPi

Good news for once