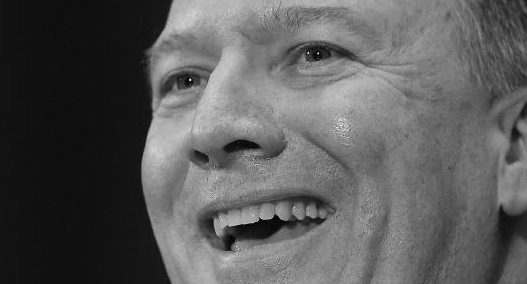 Trump's Secretary of State Mike Pompeo on Monday gave a speech in which he praised the Arctic region's rapidly shrinking sea ice for all the economic opportunities the melting waterways present to shipping commerce. No mention of climate change or any risks from anthropogenic changes at all, nothing bad, just new trade routes.

"The Arctic is at the forefront of opportunity and abundance," Pompeo uttered glibly today in remarks in Rovaniemi, Finland.

"It houses 13 percent of the world's undiscovered oil, 30 percent of its undiscovered gas, an abundance of uranium, rare earth minerals, gold, diamonds, and millions of square miles of untapped resources, fisheries galore."

Oh, and it houses Russia, too!

"Steady reductions in sea ice are opening new passageways and new opportunities for trade," he went on.

"This could potentially slash the time it takes to travel between Asia and the West by as much as 20 days."

“POMPEO delivered his Arctic policy speech, which largely focused on the threats Russia and China posed to the region, on the same day a UN report warned that one million species were at risk of extinction due to human action, including climate change,” reports CNN.