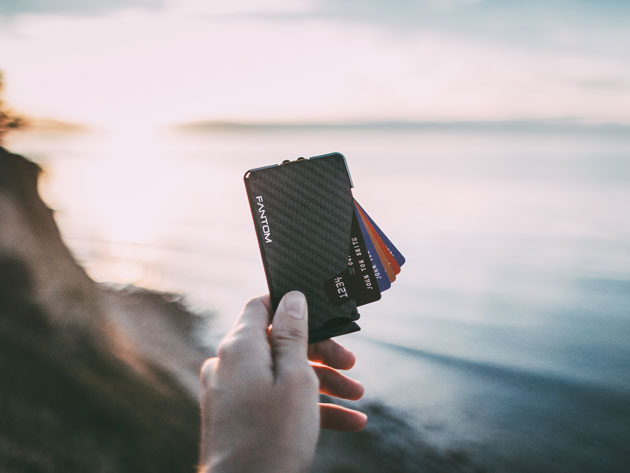 Tired of bulging pockets? It seems crazy that we're carrying around tiny AI computers in one pocket, while the other one is overstuffed with cash, cards and old receipts held together by a flimsy piece of cloth or leather.

The bad news is, most of us still need those cards (and occasionally, even the cash). The good news is, we've found five next-gen wallets that will allow you to carry all that stuff in a much slimmer package, with a modern perk or two thrown in.

Made of super-thin Saffiano canvas, the Bando can hold up to ten cards in a way that not only saves space but time. Pull on a tab, and out pop the two cards you use most often in an easy-access sheath. There's also a secret compartment in the back, and the entire wallet is lined with RFID protection. The Dash Bando Slim Utility Wallet is $17.99, more than 25% off the original price of $25.

The Fantom 10 features an ergonomic design that stresses accessibility. You can pack 6-10 cards into the single compartment, and they all fan out of the side with a simple flick of the lever on the top. As a bonus, the carbon fiber material is RFID-protected. Get the Fantom 10 Quick Access Slim Wallet for 37% off the MSRP at $49.

Here's one for those who need no frills, and want their gear extra light. This wallet is made of RFID-resistant aluminum, with a clip on the back for cash. The material is sturdy, and the elastic straps expand to hold up to 12 cards. The Minimalist Aluminum RFID-Blocking Wallet is on sale for $19.99, a 59% discount from the original price.

Other than the strategically-placed elastic bands, this waterproof card holder is basically a card itself. But that's hardly all: Built from anodized aluminum, it incorporates eight survival wrenches (5 US standard, 3 metric), two drive holders, two screwdriver bits and a bottle opener. All that while capably holding eight cards and 30 bills. Get the Bundeze Bandit Multi-Tool Wallet in Black for $21, 16% off the list price.

Also made from sturdy Saffiano canvas, the Dash 4.0 holds the most cards of them all - up to 15. Even fully packed, it remains super-thin and organized. You can pop your favorite cards out of a pair of quickdraw pockets, and store your cash in a dedicated slot. And as the name implies, the lining protects from RFID signals. Available now for a 16% discount, the Dash 4.0 RFID-Blocking Wallet is $19.99.