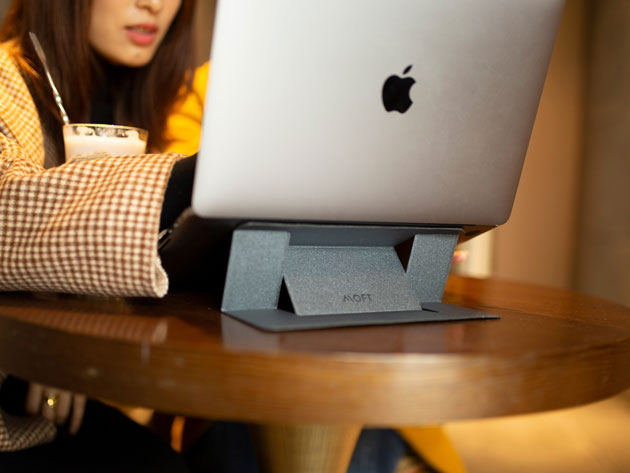 Minimalism is the new black, and MOFT is the perfect example of it. We first caught wind of the stand on its Indiegogo page, where it raised over $1 million. Yes, that's a one and six zeroes. When the hivemind is willing to drop that much dough, it's a good bet that someone is on to something.

In this case, that "something" is a rock-solid design ethic.

The MOFT is lighter than a pen thanks to its polyurethane construction. An adhesive strip secures it to the back of your laptop, where it lays flat - you might say almost invisible - when not in use. When you need to elevate your laptop, just flip it open. Instantly, it pops out into one of two configurations, providing a lift of 2 or 3.2 inches to the back of your laptop screen. That elevation can make a world of difference by reducing strain on your back and neck, not to mention your wrists. It basically transforms any surface into the ideal workspace, and you'll notice the results right away.

The MOFT fits laptops and tablets up to 15.6". Not that you'd need it to, but the architecture of the design is so sturdy it can hold up to 18 pounds.

MOFT: The "Invisible" Laptop Stand is already on sale for $19.99, more than 15% off the list price of $24. But for Memorial Day weekend, you can take an additional 15% off that final price by using the online promo code WEEKEND15. Grab one today.