10 auto accessories that will help you drive safer and easier 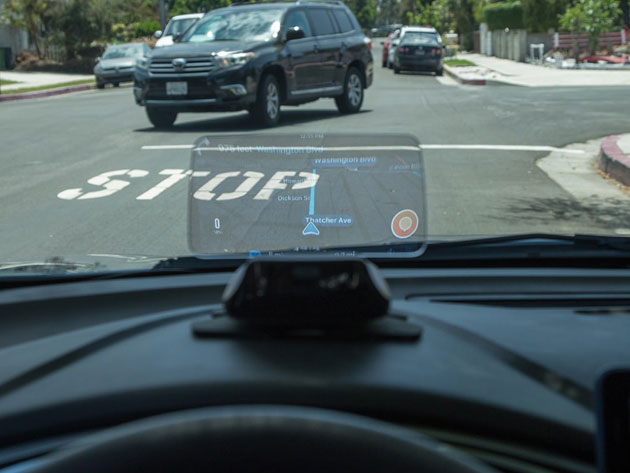 After too many trips to the mechanic, we're conditioned to think anything you add to our car is going to be expensive. In a word: Nope. Turns out there's plenty of tech you can add on to your car for a steal, both inside and outside. Here are ten of our favorite auto accessories, from chargers to dash cams, all of which are on sale. What's more, you can take an extra 15% off the final price on any of them by entering the online code WEEKEND15.

Turn your phone from a potential driving hazard to a full-on HUD navigator with this handy conversion kit. Any Miracast or Airplay-enabled phone can throw up a map in an easy line of sight, and you can still answer calls and switch music tracks while it guides you. The Hudway Cast Dashboard Heads-up Display is $199, a full 13% off the list price.

You're covered literally anytime with the GoSafe, which records in HD even when your car is parked. An onboard sensor automatically saves files in case of a collision, and you can view the footage on any Wi-Fi connected smartphone. The Papago GoSafe 366 Dash Cam is now $249.99, 16% off the MSRP.

The hefty internal battery on this super-portable unit can not only jump-start your car up to 20 times on a single charge, but it can also juice up your handheld devices too. The 3 USB ports include a QuickCharge 3.0 connection that delivers a charge about 75% times as fast as a typical battery. The 14,000mAh Car Jump Starter Kit is $55.99, more than 25% off the original price.

Say goodbye to those fights about who gets to commandeer the cell phone charger in your car. This unit splits a charge into four USB ports with a max output of 5.2A - enough for you and the entire back seat. The Aduro PowerStation 4-Port USB Car Charger is more than 75% off at $11.99.

Parking sensors can be a game-changer, but it isn't just a luxury add-on anymore. The FenSens attaches onto your license plate in minutes, then pairs with your phone to send visual and vibration alerts when it detects objects in the path of your bumper. Pick up the FenSens Smart License Plate Frame for $79, down from the previous sale price of $119.99.

This dash mount for your phone is not only fully adjustable with 720º free angle rotation, but it also charges your phone wirelessly while you drive. Compatible with all Qi-enabled phones, the ENEGARM Wireless Car Charger is $34.99 - a full 30% off the list price.

Talk about easy to use. This innovative phone mount pops into the gap into nearly any gap in your dashboard, then uses the phone's own weight to keep it securely in place. The Gravity X Car Mount is $19.99, more than 30% off the original price.

This sturdy holder fits into any cup holder, then allows you to adjust your phone or tablet for maximum safety with a rotating 360º mount. Get the U-Grip Cup Holder Car Mount for Phones and Tablets for $12.99, 78% off the list price of $59.99.

This dash cam sports a 140º field of vision to capture all the action in 1080p HD. More importantly, it even incorporates a collision warning system and other driver assist features to alert you to accidents before they happen. Grab the GoSafe S37 1080P HD Sony Exmor Sensor Dash Cam for $99.99, down from the already-discounted $149.99.

Time to throw out that little tree on the rear-view mirror. The ionizer on this compact unit removes cigarette smoke in seconds and filters out pollen, pet dander and other allergens. You can get the Car Plug-In Air Purifier for $19.99, more than 75% off the list price.