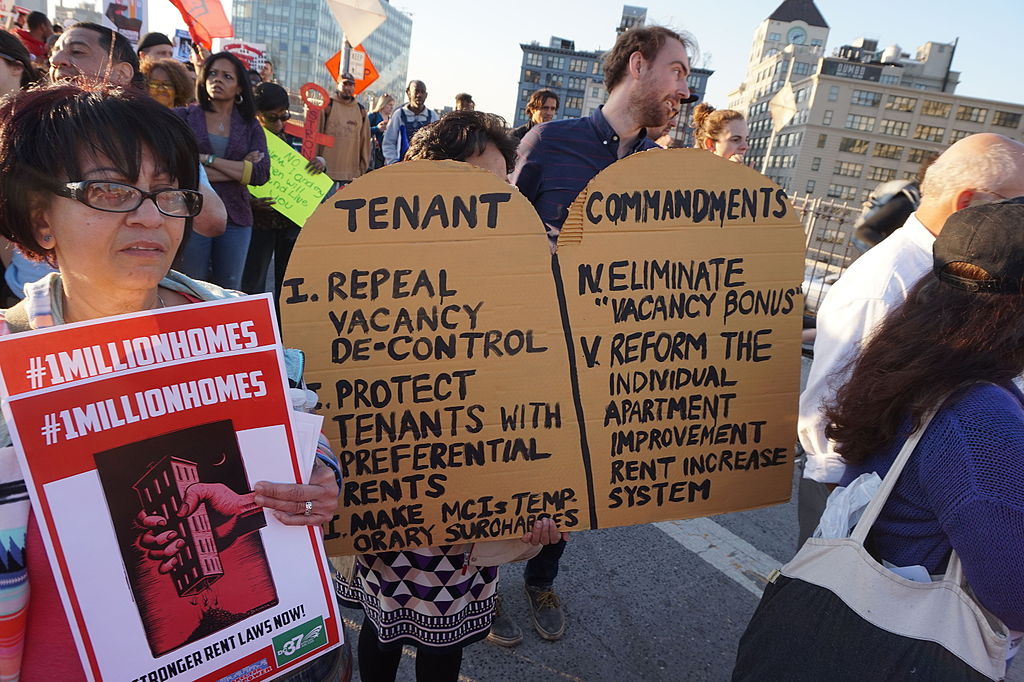 There isn't single county in the nation where a minimum-wage worker can afford to rent a two-bedroom home; and although LA has the worst homelessness crisis in the country, New York state is catching up, with homelessness growing by 46% since the financial crisis -- the fastest rate in the nation.

Surging housing prices have a multitude of causes, but they mostly come down to increased inequality and the drive to put money into the pockets of the rich at the expense of working people: basically, it's one part post-2008 evictions, one part wage stagnation, and one part private equity buying-frenzy.

Or, to put it another way: the banks destroyed the economy, their investors cut wages, working people lost their homes while banks got taxpayer bailouts, and then the rich used the tax subsidy to buy the houses that the working people who paid for it had lost, moved those people back into their old homes, and hiked rents while slashing maintenance.

Shelter is a basic human need, right there on Maslow's hierarchy, one step above food and air. When shelter is captured by the finance sector and turned into "an ATM for Wall Street," everybody suffers.

In New York State, things have reached a breaking point, at a statewide coalition stretching from Lake Ontario to the Bronx is promising a huge shakeup in the state's protection for tenants, with rent stabilization and rules prohibiting eviction without cause enshrined in a set of eight interlocking bills that are being carried forward by a slate of state Democratic legislators who won elections last year by refusing to take real-estate industry money.

The activists are girding for a fight: a more modest rent control ballot proposal in California attracted record-breaking amounts of money from the landlord lobby, who threatened to hike rents and evict tenants if the measure passed.

The proposed rules are based on New York City's existing tenancy protections, but stripped of the loopholes that have been poked in them since they were enshrined in the 1970s.

“When people think about rent regulation, they often think of it only as a way to limit rent increases, but it does much more than that. It also protects people from arbitrary evictions, because it requires a landlord to have a good reason before they evict someone, and that is huge,” said Judith Goldiner, an attorney at the Legal Aid Society in New York. “Length of tenure is what rent regulation really gives you. It allows you to really be in a neighborhood, to have connections there. It allows your kids to go to neighborhood schools, it allows you to go to local hospitals, and it allows you to have neighbors and friends to help you out. It provides a sense of security that those without rent regulations don’t have, and this is hugely important, not just for tenants but for the city as a whole.”

Yet New York’s rent-stabilization system is under siege, and it has been for decades. From the very beginning, New York City landlords were allowed to largely self-police compliance with the regulations and, according to McKee, worked constantly to undermine the system. In the 1990s, the real-estate industry mobilized to gut rent stabilization, scoring their first hit in 1993, when Senate Republicans engineered several amendments weakening the rent laws. In 1997, they successfully pushed for a loophole called the vacancy bonus, which lets landlords raise rents by 20 percent (sometimes even more) every time a tenant moves out of a rent-stabilized unit.

Such loopholes have been devastating to the state’s rent-stabilization system. Aaron Carr of the Housing Rights Initiative said the flaws in the system have led to widespread fraud and predatory speculation. “For landlords, the name of the game is to buy up a building and push out as many tenants as possible in the shortest time period possible and remove the apartments from rent stabilization,” he said. In recent years, Carr’s organization has filed dozens of class-action lawsuits against landlords in New York, arguing that they have fraudulently inflated construction costs or otherwise exploited loopholes to illegally raise prices on tenants. A recent state audit of 1,100 landlords found that in as many as 40 percent of cases, landlords could not legally justify past rent increases at their stabilized units.