This 1:6 scale Tempest machine plays just like the classic 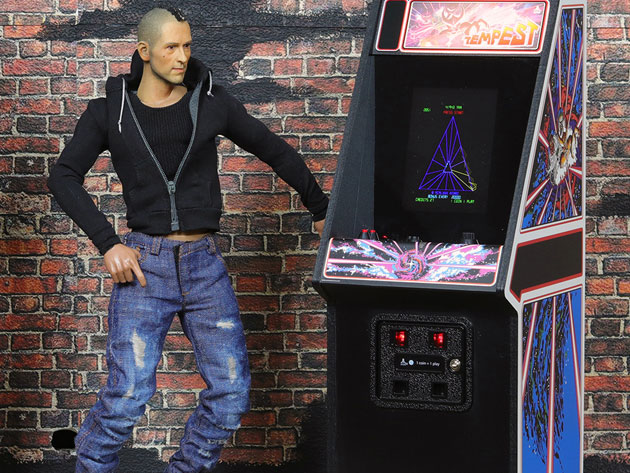 If we were to pick one game out of the classic arcade pantheon that truly represented the anxiety and energy of the '80s, it would have to be Tempest. The neon vector graphics. The jackhammer pulse of the sound effects. And of course, the faceless, unstoppable enemies crawling up that tunnel to meet you. If you're old enough to remember it, you've probably lost several weeks worth of allowance money trying to beat it. This was the era when games did not care about your ego one bit, and if you think about Tempest at all, you might be harboring thoughts of revenge. Of taking that old machine down a peg or two.

If so, the guys at Replicade are on your wavelength. Their latest arcade tribute is a working, fully playable 1:6 scale Tempest machine.

These are the same guys that gave the shrink-ray treatment to Centipede a while back, and they're on a roll. All the features are here from the classic edition: Original art on the wood cabinet and the iconic spinner knob controller. (Replicade throws in replacement spinner caps for when your temper gets the best of you.) It's an officially licensed product by Atari, so it sports the same authenticity under the hood - original arcade ROM, including that level-select feature you remember from the opening screen. It even saves your high scores, and there's a special storage compartment hidden behind the coin slot. The Tempest x Replicade runs on an internal lithium-ion battery, easily rechargeable by USB.

In short, it's the same white-knuckle game from the classic arcades, only action-figure size. The only thing that's different is the unlimited play. And if we remember right, you're going to need it.