The best Joker is the woman Joker who snaps after a lifetime of being told to "smile, baby" by shitty men 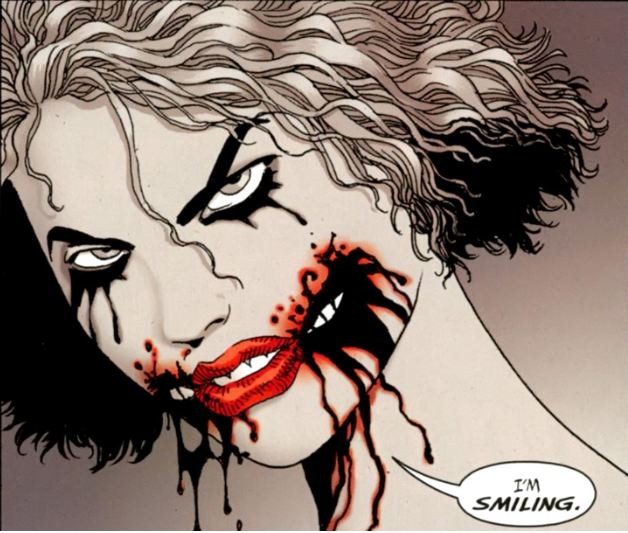 Last week, Geraldine DeRuiter tweeted a short, sharp alternate character arc for The Joker: "The Joker should have been a woman. And she finally went insane because too many random dudes told her to smile, so now she perpetually smiles while terrorizing Gotham."

The tweet went viral, and immediately, DeRuiter's mentioned filled up with entitled manbabies who were angry that a woman had reminded them that women get a lot of public harassment, effectively giving her the same origin story that her notional Joker had, should she decide to launch a life of crime.

The thing is, DeRuiter's Joker origin story is much better than the traditional Joker tale: "The original origin story for the Joker usually involves him having one bad day. A whole lifetime of systemic misogyny is a much better reason for snapping."

DeReuiter's longer rumination on her Joker experience -- including the circumstances of her original tweet, which arose after an epically terrible day was interrupted by some random asshole who shouted across a hotel lobby at her ("Awwww, that’s way too serious a face!") -- lacks the compactness of her original post, but makes up for it with some real insight into the Batman canon, its relationship to gender, and directions for better superheroes in the future.

“UGH JUST WRITE NEW STORIES, WHY DO WE NEED TO REWRITE THE OLD ONES?”

This argument is interesting to me, because it’s not a zero-sum game. New stories are important. New art is important. Celebrating the work of artists whose work has not been given the amount of credit or attention it deserves is a wonderful thing. And making sure we have more diversity in comics and movies and literature and music and art is hugely important.

So why can’t we do that AND reclaim old stories? Oh, right. Because some people don’t want us to. They don’t want female Ghostbusters. They don’t want a black Batman or a multi-racial Spiderman. Because they don’t like the idea of something they think is exclusively theirs suddenly including other people, like women and PoC. Because all of history has been about them, and they don’t want to share it. I remember going to see Tim Burton’s Batman in the theaters, and thinking it was magical – but also feeling somehow left out. I want that story to be mine.

Comic books have historically been very white and very male. And there are a lot of ways to challenge that. One is by telling new stories. And the other is by rewriting that history. We need to take a big diverse flag and stick in right in the middle of those old dusty comics – because they belong to us, too.