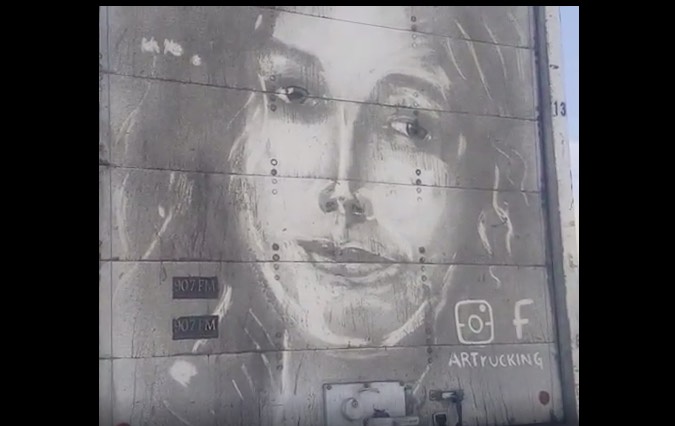 They call him 'The DaVinci of Dirt.'

Gustavo Arrelano has a wonderful profile in the Los Angeles Times about an artist and trucker in L.A. who “turns road grime and elbow grease into mobile masterpieces.”

One day in 2016, as Arnulfo Gonzalez waited at a warehouse to pick up cargo, he stared at the filth caked on the back door of his box truck. After a moment of contemplation, he ran his finger on it.

The Mexican immigrant once had ambitions to become an artist. He had earned a degree in the subject from East Los Angeles College and taught ceramics workshops in Bell Gardens. He took his wife on date nights to drawing classes, where they used each other as subjects.

Gonzalez set aside those dreams and became a trucker in 2000, “because there was more money there,” the father of two said. Besides an occasional notebook doodle, work and his family were his focus.

Until the day he realized that his canvas and paint had been there all along.

By the time his load was ready, he had outlined a woman’s face in the muck.

Dockworkers immediately offered praise. And so, every other week since, the short-haul driver has offered a new “painting” to commuters across Southern California, using only the dirt and grime that collects on his troca. Jesus Christ. A giant jellyfish. A Thanksgiving spread. A horse with a flowing mane, a soulful eye and richly detailed reins.

Go see a video profile of Gonzales's work, and read the rest of the story:

I am very grateful that Tomorrow LA times is releasing the interview for the truck mural l thanks to Gustavo Arellano , crew ,and everybody that made it possible.

#Farewell to this #sugarskull #truckmural. We are here momentarily live your life to the fullest #yolo