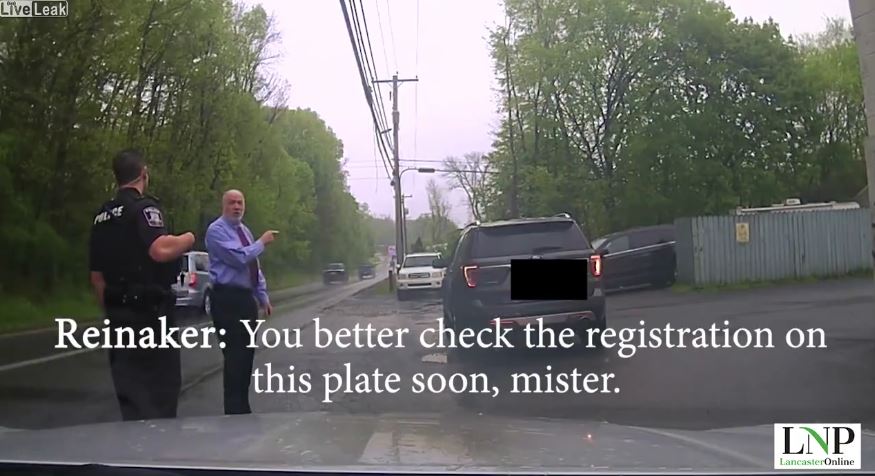 Pulled over for tailgating, Lancaster County President Judge Dennis Reinaker gets out of his vehicle, advances on the cop, belligerently demands he explain himself, then orders him to "check the registration on this plate soon, mister." Reinaker is sent on his way without a ticket.

*Police officer pulls over tailgating driver. Reinaker gets out of car and avances toward officer's vehicle*

Reinaker: What do you think you're doing pulling me over? For blowing my horn?

Officer: Sir, go back into your car. I'll be with you in a second.

*The officer and Reinaker return to their vehicles. A few moments pass as the officer looks up the plate*

Officer: Have a good day, Judge!

“The driver got out and was irritated,” Zerbe said in a phone interview. The chief said he had not seen the footage but was familiar with the incident.

“(The driver) wanted to bring to the officer’s attention who he had stopped,” Zerbe said. ...

The dashcam video shows that after the officer checked the registration, he released the judge without explaining why he was stopped.

From the quoted legal experts, the short of it seems to be that Reinaker's instruction is an effective, studied way for an official to ensure they make themselves known without directly stating directly who they are, allowing them to get out of trouble without getting into trouble.

A look through the archives shows Reinaker proposed establishing a 'fast track' process for local DUI suspects, so the real courts only have to deal with, quote, "more serious crimes".

do you know who I am / judges

In Comal County, Texas, judge Jack Robison, presiding over the trial of accused sex trafficker Gloria Romero Perez, walked into the jury room after the jurors landed on a guilty verdict and urged them to reverse their decision because God says she’s innocent. Unswayed, the jurors stuck to their guilty verdict. Another judge later ruled […]

On Friday, an appeals court judge in Camden County, New Jersey tossed out a verdict against Dr. Abbas Husain who in 2011 a jury found guilty of having sexually harassed an office employee. It came out later that one of the jurors was “very passionate” and concerned that Husain, who is Hindu, hadn’t put his […]

I guess it’s kind of like yelling fire in a crowded theater: Jacob Maldonado of Honolulu, Hawaii had been called as a possible juror in a misdemeanor assault trial but really didn’t want to serve on the jury. So just before the selection process began, Maldonado yelled “He is guilty! He is guilty!” outside the […]