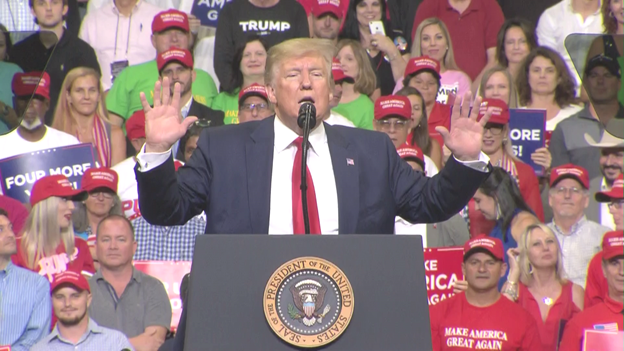 Donald Trump held a rally in Orlando, Florida tonight, and brought out all the great 2016 campaign trail hits -- 'lock her up,' 'acid washed,' 'deplorables', plus he trashed the Mueller report. Trump also made it official: The 2020 Trump re-election campaign slogan is KAG, Keep America Great.

As Hunter Schwartz wrote last week, this is not a new tagline.

Trump’s been polling supporters about the “Keep America Great” at recent events, and the reaction isn’t particularly decisive. Even Trump waffled on whether or not he likes it.

“KAG. I don’t know if I like that as much,” he said. At another fundraiser in April, he suggested the campaign could also keep “Make America Great Again” and use both.

The trademark for “Keep America Great” was filed for Donald J. Trump for President, Inc. on January 18, 2017, two days before he was sworn into office and subsequently filed for reelection, and 882 days before his scheduled 2020 kickoff rally in Orlando, Florida. Trump is known for thinking ahead when it comes to political branding; he trademarked “Make America Great Again” on November 19, 2012.

"My only special interest is you," @POTUS tells #MAGA crowd. pic.twitter.com/5wvdAcYOyV