Get July 4th savings on organizers for keys, bags, and more 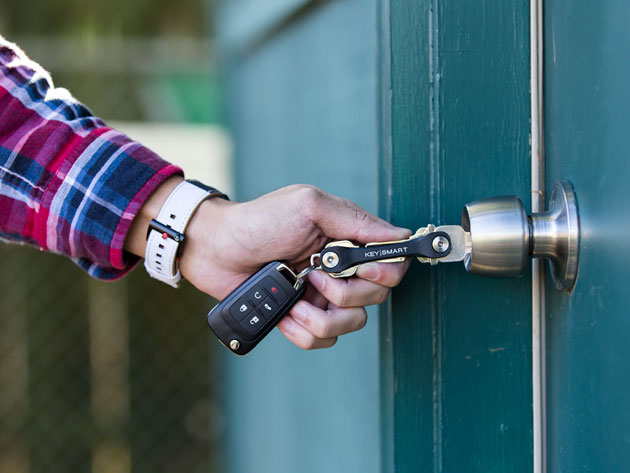 The guys at KeySmart hit it big on Kickstarter in 2013 with their streamlined alternative to keychains, and they haven't stopped innovating since. For Independence Day, they're celebrating that good old American entrepreneurship with a deal on all their best stuff: Right now, you can take an extra 15% off the final price listed on all their gear below by entering the code FIREWORK15.

This was the idea that started it all: a jingle-free, fumble-free way to carry your keys. The Flex makes it easy to access up to 8 keys in a polycarbonate, stainless steel case. Pick up a 2-Pack of the KeySmart Flex for $15, a full 25% off the list price.

Whether you need it for dire emergencies or just prepping a cigar, the Dapper Knife is right by your side. It's easily attachable to any keychain or KeySmart fob and is just as durable. Grab the Dapper 150 Ultra Slim Knife for $18 (a 27% discount), or a 2-pack of its smaller cousin the Dapper 100 for $22 (26% off the MSRP).

This leather-lined version of the classic KeySmart fob has the same durable construction, plus a more secure grip and greater carrying capacity (up to 10 keys). Get the KeySmart Leather in black for $39.99 today.

KeySmart's charger packs ample power for charging your smartphone or other device multiple times, and it's lightweight enough to go anywhere. It's also fully compatible with their Urban 21 commuter bags and organizers. Grab a KeySmart 10,000mAh Portable Charger for $33, more than 15% off the original price.

A simple idea, perfectly executed: Mountable magnets that will hold your keys near the door. It saves far more space than a typical key rack, and the magnets won't harm the electronics in vehicle remote entry fobs. A 6-pack of these KeyCatch Magnetic Key Racks are now $15, down 25% from the retail cost.

This deluxe version of the KeySmart fob not only packs a bottle opener and LED light, but a Tile™ Smart Location chip that allows you to find your keys no matter where they are via a smartphone app. It can even work in reverse to find your phone by making it ring. Get the KeySmart Pro with Tile Smart Location for $39.99, a full 33% discount off the MSRP.

Here's a bag that's made for city living but is easily waterproof enough for the wilderness. Its many innovations include a hardshell pocket specifically for glasses or other breakables, plus HexBreathe™ padding that is ventilated enough to keep your back sweat-free. The Urban 21 Commuter Bag is on sale for $185, 22% off the original retail price.

Equally useful in a bag or as a stand-alone case, this organizers stows everything from your credit cards to a tablet in well-placed mesh pockets. Pick up the Urban 21 Pocket Organizer for $16, 20% off the MSRP.

For a more free-form approach to stowing your stuff, try this latticed organizer that features elastic bands and a back pocket for your iPad. It also stores easily in your Urban 21 commuter bag by way of a velcro patch. Right now, the Urban 21 Grid Organizer is also $16, down 20% from the list price.