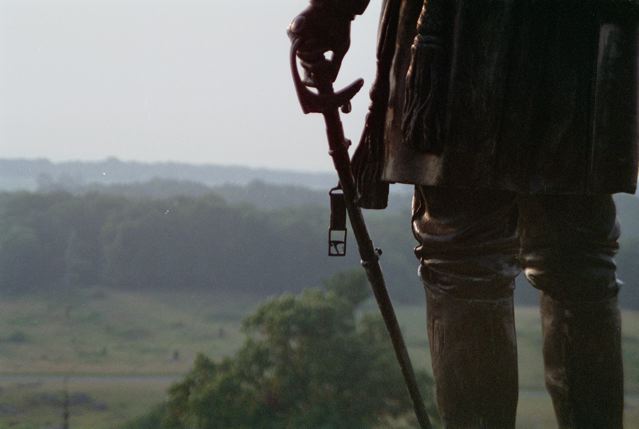 Four score and seven years ago our fathers brought forth on this continent, a new nation, conceived in Liberty, and dedicated to the proposition that all men are created equal.

Now we are engaged in a great civil war, testing whether that nation, or any nation so conceived and so dedicated, can long endure. We are met on a great battle-field of that war. We have come to dedicate a portion of that field, as a final resting place for those who here gave their lives that that nation might live. It is altogether fitting and proper that we should do this.

But, in a larger sense, we can not dedicate -- we can not consecrate -- we can not hallow -- this ground. The brave men, living and dead, who struggled here, have consecrated it, far above our poor power to add or detract. The world will little note, nor long remember what we say here, but it can never forget what they did here. It is for us the living, rather, to be dedicated here to the unfinished work which they who fought here have thus far so nobly advanced. It is rather for us to be here dedicated to the great task remaining before us -- that from these honored dead we take increased devotion to that cause for which they gave the last full measure of devotion -- that we here highly resolve that these dead shall not have died in vain -- that this nation, under God, shall have a new birth of freedom -- and that government of the people, by the people, for the people, shall not perish from the earth.

This is the text of the Bliss copy, the most reproduced known version of President Abraham Lincoln's Gettysburg Address.

President Lincoln's speech at the Lyceum also merits a read.

...Here then, is one point at which danger may be expected.

The question recurs, "how shall we fortify against it?" The answer is simple. Let every American, every lover of liberty, every well wisher to his posterity, swear by the blood of the Revolution, never to violate in the least particular, the laws of the country; and never to tolerate their violation by others. As the patriots of seventy-six did to the support of the Declaration of Independence, so to the support of the Constitution and Laws, let every American pledge his life, his property, and his sacred honor;--let every man remember that to violate the law, is to trample on the blood of his father, and to tear the character of his own, and his children's liberty. Let reverence for the laws, be breathed by every American mother, to the lisping babe, that prattles on her lap--let it be taught in schools, in seminaries, and in colleges; let it be written in Primers, spelling books, and in Almanacs;--let it be preached from the pulpit, proclaimed in legislative halls, and enforced in courts of justice. And, in short, let it become the political religion of the nation; and let the old and the young, the rich and the poor, the grave and the gay, of all sexes and tongues, and colors and conditions, sacrifice unceasingly upon its altars...

cured with what is right