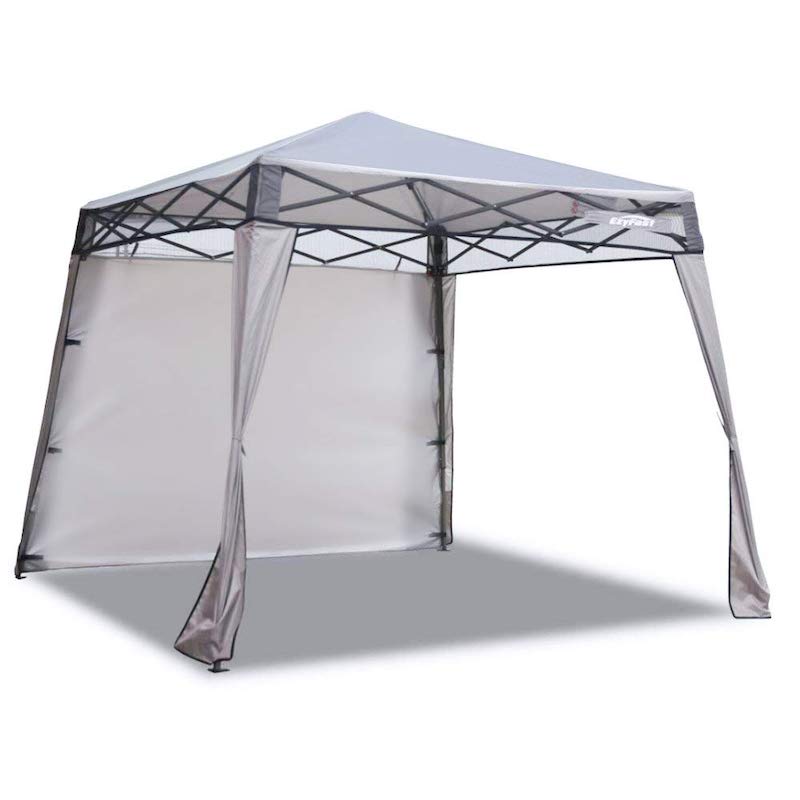 I am spending most of my summer camping with my dogs. Shade became very important on day 2 when I realized that not having shade on day 1 toasted the back of my neck. Despite liberal smearing of 60 SPF broadspectrum sunscreen, I had to find a solution that'd work for me.

I largely travel without human companionship, and when I do it tends to be of the 12-year old variety (less-than-helpful.) I needed a canopy that'd easily go up, and I wanted to be able to quickly tear the thing down if wind unexpectedly kicked up. I am trying to stay to beaches and coastal campsites, where wind can be an enemy.

This EzyFast 6x6 shade does the job! It is fairly light, the manufacturer says 17lbs, and very simple to put up by my ownself. The frame is a single unit that practically expanded itself when I took it out of the bag the very first time. Once the frame is out and locked into place with handy built-on locks, you put the cover on and then extend the legs. You can weigh it down by putting stuff in the weight pockets built into the cover.

The cover material is a bit thin, but it'll do. The stakes the unit came with are nearly useless, but with additional weigh in the cover it seems to stay in place just fine. If it gets windy out, however, I will lower the legs, remove the cover and go hide in the camper.

Height-wise this is fine for me at 6' even. I duck a little to get under the cover, but there is plenty of room to move around, and certainly sit, under it. The 6'x6' and 7'x7' measurements they offer are for the FOOTPRINT, and not the height.

Putting the canpoy away and back in its bag was simple. It all fit easily, tho the zipper on the storage bag is probably the weakest link with this product.

If you need some quick beach or camping shade, this is shade you can throw around.