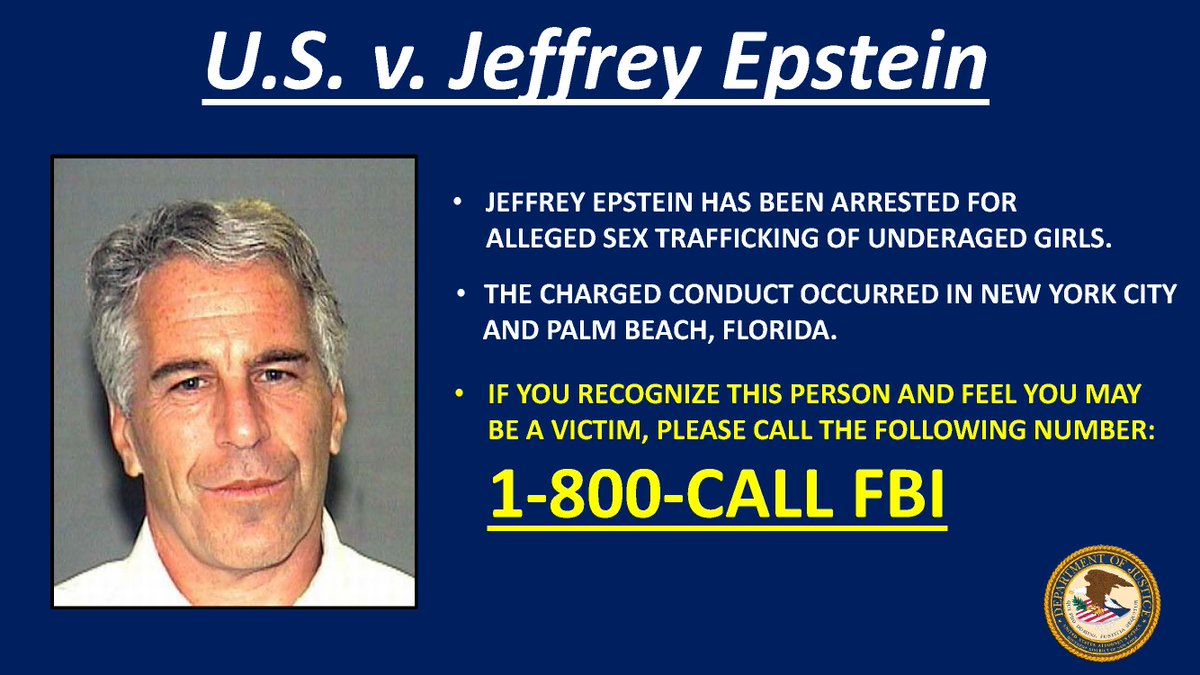 “He’s a lot of fun to be with,” Trump said of Epstein in 2002. “It is even said that he likes beautiful women as much as I do, and many of them are on the younger side.”

Prosecutors in the new federal case against the multi-millionaire say he possessed a very large collection of sexual photographs of girls who look very young.

In 2002, Trump described his friend Jeffrey Epstein as “a terrific guy.”

“He’s a lot of fun to be with,” Trump told ⁦New York Magazine. “It is even said that he likes beautiful women as much as I do, and many of them are on the younger side.”

Prince Andrew with 15 year-old Virginia Roberts. Ghislaine Maxwell lurks to one side, clearly cheerful about the way it's going. #PrinceAndrew #NonceUponATimeInEpsteinLand pic.twitter.com/XPPu8C7d6i

There's a photo of Trump, Melania, Epstein, and his accused child-wrangler Ghislaine all hanging out in 2000 here.

Federal prosecutors in New York unsealed the criminal indictment against Epstein on Monday. They say Epstein operated a sex trafficking ring in which he raped and otherwise sexually abused dozens of underage girls.

Claims that Epstein was doing bad things to many at-risk young women in an organized fashion have circulated for years, as have rumors that politically powerful men like Alan Dershowitz, Bill Clinton, and Donald Trump were part of the scene. The men have denied any wrongdoing.

But what did they do?

What do they know?

Florida let Epstein off the hook in 2008, with help from the man who is now Trump's Labor Secretary Alexander Acosta, at the time a US attorney in Florida.

Acosta gave Epstein the “deal of a lifetime.”

If you believe you are a victim of Jeffrey Epstein, or have information about the conduct alleged in the Indictment unsealed today, please call 1-800-CALL FBI pic.twitter.com/f3ZMThOxJX

According to the indictment, between 2002 and 2005, Epstein ran a trafficking enterprise in which he paid hundreds of dollars in cash to girls as young as 14 to have sex with him at his Upper East Side home and his estate in Palm Beach, worked with employees and associates to lure the girls to his residences and paid some of his victims to recruit other girls for him to abuse.

"In this way, Epstein created a vast network of underage victims for him to sexually exploit, often on a daily basis," Manhattan US Attorney Geoffrey Berman said in a statement.
Epstein, 66, was arrested Saturday night at Teterboro Airport in New Jersey aboard his private jet upon returning from Paris.

Later that evening, federal agents executing a search warrant of Epstein's mansion in New York City recovered and seized a "vast trove" of lewd photographs of young-looking women or girls, prosecutors said in a bail memorandum.

Some of the photos were discovered in a locked safe along with compact discs with hand-written labels that read, "Young [Name] + [Name]," "Misc nudes 1," and "Girl pics nude," according to the bail memorandum.

Here is what law-enforcement officials found in Jeffrey Epstein’s Upper East Side mansion on Saturday night when they executed a search warrant, according to SDNY’s detention memo: pic.twitter.com/CSKWMmCVY8

US Attorney for the Southern District of New York Geoffrey Berman announced charges against Jeffery Epstein on July 8, 2019.

• Once again, the US justice department treats pedophile Jeffrey Epstein like a saint

In calls to a radio show, Fox News host Tucker Carlson defended a child rapist, justified child rape, and said that women were “extremely primitive.” Between 2006 and 2011, Tucker Carlson spent approximately an hour a week calling in to Bubba the Love Sponge, a popular shock jock radio program where he spoke with the […]

Roy Moore, who has been thoroughly endorsed by Donald Trump, said in 2011 that the US government would "solve many problems" by ridding itself of every Constitutional amendment after the first ten -- a list that included the 13th Amendment (which ended slavery), the 14th (which gave citizenship to former enslaved people); the 15th (which […]

A toxic mix of voter suppression and dark money infusions has allowed Republicans to seize power at the state level across America, producing a series of living labs where their ideology has been allowed to play out with disastrous consequences.