Robotic nursing aide wins over both skeptical nurses and their patients 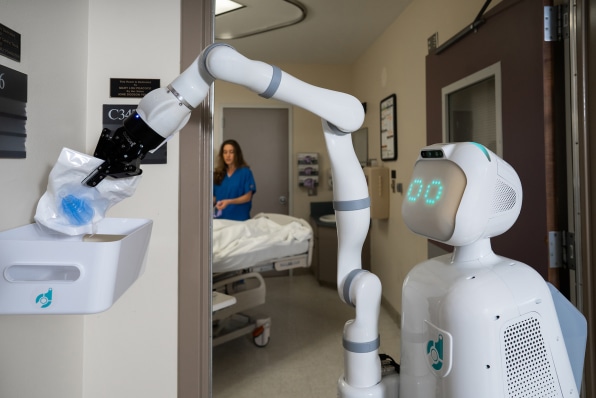 Diligent Robotics's Moxi is a robot created by Andrea Thomaz (a former robotics professor at UT Austin and Georgia Tech's Socially Intelligent Machines Lab) and Vivian Chu (one of Thomaz's former grad students); they funded by a National Science Foundation grant to create a robotic nursing aide that is designed to do routine, non-human-interaction chores for nurses with a minimum of effort from nurses.

For example, when a patient is discharged, a Moxi can fetch and deliver an "admission bucket" (a standard package of supplies for a new patient) automatically; some nurses in a limited trial say they never saw Moxi undertake this chore, but rather simply found that every recently vacated room had an admission bucket waiting at the appropriate time.

The design is meant to relieve nurses of mechanical, robotic tasks (errands) and free them up to concentrate on care and humans. After four one-month beta trials, the company says Moxi robots do that very well, but they were surprised by the affection that both nurses and patients expressed for the robots, which was so intense that the technicians began to schedule an hour-long "social lap," in which the robot wanders around and makes heart-emoji eyes at patients.

The physical design of Moxi reflects Thomaz's "Socially Intelligent Machines" research; they are designed to be cute and nonthreatening, and to give social cues that humans intuitively grasp, like looking in the direction they're moving.

After declaring success in its beta program, Diligent plans to roll the robots out in three or four hospitals in 2019.

While Moxi’s job is to take as many mundane tasks as possible off nurses’ plates so that they could spend more time interacting with patients, the Diligent team was surprised to find that patients were fascinated by the robot and wanted to interact with it during their beta trials. Patients ended up being so infatuated with Moxi that they would ask for selfies with the robot; one child even sent Diligent Robotics a letter asking where Moxi lived.

The robot was so popular that the Diligent team programmed superfluous activities for Moxi to do once an hour so that the robot would wander around the floor and flash heart eyes at people. “In between tasks Moxi would make a social lap to talk to her fans,” Thomaz says.

During the trials, Thomaz reports that the nurses and hospital staff had a similarly positive reaction—even from early skeptics. “Some nurses were like, ‘It creeps me out a little, I don’t like robots, I’m not into AI,'” Thomaz says. “But by the end they [were] like, ‘Hey Moxi, hey girl, how’s it going?’ It was dramatic, in a matter of two to three weeks.”

A hospital introduced a robot to help nurses. They didn’t expect it to be so popular [Katharine Schwab/Fast Company]