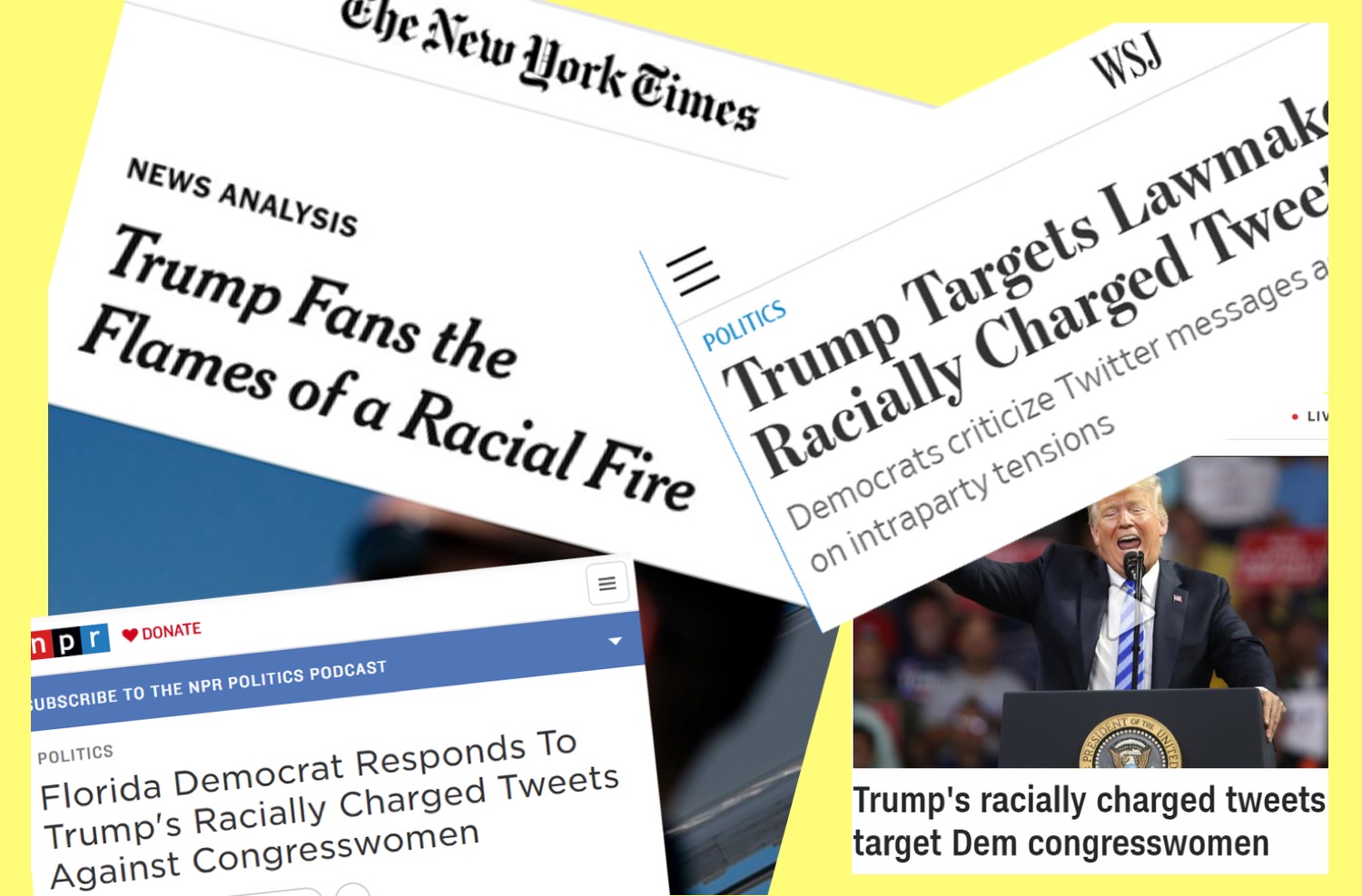 We had another chance to see cowardice in action on Sunday.

On Sunday morning, popular-vote-losing illegitimate president Donald Trump tweeted some awful racist tweets that you can read about everywhere, all the time, because he does white supremacist bigoted stuff constantly and will only continue to escalate it as his day of cosmic comeuppance approaches.

The tweets were explicitly racist.

So why did the big respected major media news outlets everyone turns to for breaking news all decide NOT TO CALL IT RACIST in their reporting, and instead rely on embedded tweets, commenters, pundits, and op-ed contributors to use the r-word?

“Racially charged” isn't a better phrase to use in this case than “racist.”

CBS morning show: "Critics" say Trump's attacks "are racist." NBC: "Some have branded his comments as racist." But ABC's @GMA and CNN's @NewDay called it what it is: "The president's racist attack."

“I know that reporters in at least two newsrooms argued with their higher-ups about this language issue on Sunday,” writes Brian Stelter at CNN.

“But in both cases they lost.”

On Fox News, so far as I can tell, the word was only used by guests or attributed to critics.

The big three nightly newscasts used the "critics" crutch as well. "Democrats are calling the remarks racist," ABC anchor Tom Llamas said. Later, he said Trump is "being called racist after firing off several tweets..." And the graphic next to him said "RACIALLY CHARGED TWEET."

On NBC, Kate Snow said the "inflammatory" Trump tweet was different than most, "with many decrying it as racist." A package by Hans Nichols quoted various condemnations from Dem lawmakers and said 2020 candidates "piled on" with criticism.

CBS was by far the weakest of the three, never getting close to the R-word. I was struck by this because the correspondent, Errol Barnett, did point out on Twitter that the hashtag #RacistInChief was trending. "President Trump took aim at a familiar target today, Democrats. This time, though, he aimed at four progressive lawmakers, all of them women of color," anchor Elaine Quijano said. Quite a nonchalant way to describe a racist rant!

On Monday morning, there was a notable change in the broadcast TV network coverage. Anchors on ABC's "Good Morning America" repeatedly referenced "the president's racist attack." On CBS, meanwhile, anchors still cited "critics." On NBC, it was "some have branded his comments as racist."

Newspaper websites, with the advantages of more space and time, gave more context. But there was still reluctance to reach any editorial conclusion. The LA Times said "it's usually considered a racist taunt." WaPo cited Nancy Pelosi, saying she "described them as racist and divisive."

The AP's headline was blunt — "Leave the US, Trump tells liberal congresswomen of color" — and its story noted Trump's "long history of making racist remarks," but left it to Democrats to say Sunday's tweets were racist. Same thing at the WSJ: The homepage headline was "Trump Targets Lawmakers in Tweets Decried as Racist." Later it was changed to say "Trump Targets Lawmakers in Racially Charged Tweets."

How news outlets are dealing with the 'moral dimension' of covering Trump and his racist tweets [cnn.com via mediagazer.com ]

Related reading: SAY IT WITH ME: RACISM [niemanlab.org]

Tweets from people I listen to, below.

Always loved hearing go back to where you came from because as a descendant of slaves, I’m here by popular demand.

Lachlan Murdoch- this is the hate you generate. https://t.co/6dFuEVhLt1

Let’s be clear about what this vile comment is: A racist and xenophobic attack on Democratic congresswomen. This *is* their country, regardless of whether or not Trump realizes it. They should be treated with respect. As president, I’ll make sure of it. https://t.co/WupieDquLA

"Reporters and anchors took the story seriously but largely leaned on 'critics,' primarily Democrats, and cited their accusations of racism." https://t.co/xnpzgsxWP5 At this very late date, we're still on "critics say."

I was regularly on the receiving end of "go back to China" taunts as a kid on the playground at school. Trump is literally employing the tactics of a schoolyard bully. The media is ok with skirting the issue by hiding behind critics.

A real problem is that politics in Trump’s era has taken on a moral dimension that news outlets either aren’t equipped to cover, or think it’s their duty to avoid. And if they avoid it, they avoid their job, which is to accurately represent to their audience what’s happening.

Fox & Friends laughs while reading Trump's bigoted "go back to Africa" tweets: Trump is "very comedic" and he is "making an important point" pic.twitter.com/T0mLYQxvmC