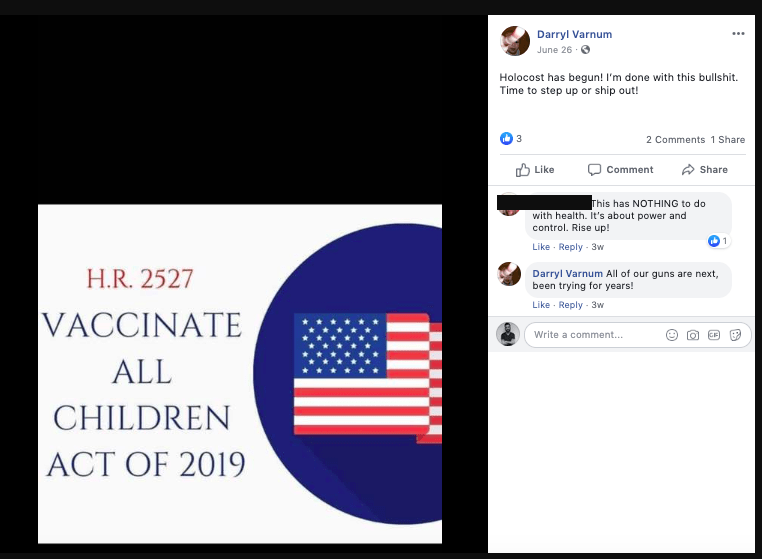 The feds charged Darryl Varnum in late June after he told the Congresswoman he was ‘gonna kill your ass if you do that bill,’ report The Beast's Jackie Kucinich and Lachlan Markay.

In his threats, the man told the lawmaker, who is black, to “get the fuck out” of America, which echoes the same sort of explicitly racist inflammatory speech that is increasingly used by Donald Trump at his hate rallies and on Twitter.

According to the complaint filed in U.S. District Court in the District of Maryland, Varnum left a voicemail for Rep. Wilson that said, in part:

“I will fucking come down and kill your fucking ass. And you’re a Congressperson, that’s fine. I hope the fucking FBI, CIA and everybody else hears this shit. This is the United States of America, bitch. Get the fuck out.”

Wilson was at the time working on the introduction of a bill that would require public schools to vaccinate registered students.

Darryl Albert Varnum of Westminster, Maryland called the congressperson—identified only as “congressperson #1”—on June 28, 2019, according to the complaint, and left a voicemail threatening to kill the member if the bill was introduced.

“I’m gonna kill your ass if you do that bill. I swear,” Varnum’s voicemail began. “I will fucking come down and kill your fucking ass. And you’re a Congressperson, that’s fine. I hope the fucking FBI, CIA and everybody else hears this shit.”

“This is the United States of America, bitch. Get the fuck out,” the voicemail continued. “I’ll tell you what I’ll come down to Miami bitch. I’ll fuck you up. Like the Cubans don’t even know.” (...)

Though the name of the member targeted is not listed in the complaint, The Daily Beast has learned that the Varnum’s death threat was directed at Rep. Frederica Wilson (D-FL). According to the complaint, the voicemail was left at the congresswoman’s Florida office. And Varnum’s tirade centered on The Vaccinate All Children Act, legislation introduced by Wilson in May. The bill would require all public schools to vaccinate all their students in order to receive any federal funding. It exempts from the requirement any student whose doctor certifies that a vaccination might endanger the child’s health.

Wilson’s office did not respond to a request for comment.

On his Facebook page, Varnum compared The Vaccinate All Children Act to the Holocaust—a common trope used by vaccine skeptics. “I’m done with this bullshit. Time to step up or ship out,” he wrote. In a comment on that post, Varnum added, “All of our guns are next. Been trying for years!”