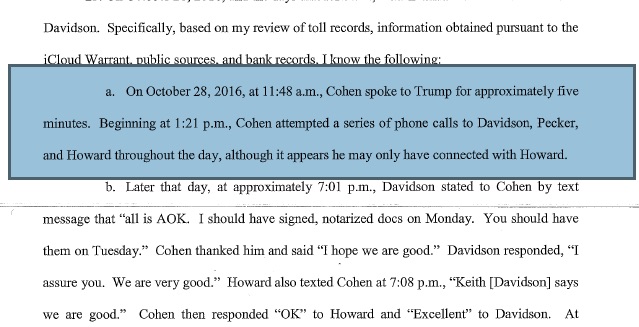 Donald Trump was directly and personally involved in the discussions that led to Stormy Daniels being paid to keep quiet about her story of an affair with the then presidential candidate, the FBI says.

Prosecution wrote in a letter to the judge that it has “effectively concluded its investigations of “who, besides Michael Cohen, was involved and whether certain individuals, made false statements, gave false testimony or otherwise obstructed justice with this investigation.”

Trump lied about it. Repeatedly. Into the cameras. On Twitter. Everywhere, all the time.

NEW: Pres. Trump tells reporters he did not know about $130,000 payment to Stormy Daniels before the 2016 election. https://t.co/iM43w2tJSK pic.twitter.com/qmnpQDl8wE

Looks like a number of people are in brand-new trouble today.

Breaking news responses from Twitter notables and reporters on the story, below.

Trump, Hicks, and Cohen had a conference call the day after the Access Hollywood tape became public. Cohen had a series of calls with the National Enquirer right afterwards. https://t.co/FDbHiLDuWt pic.twitter.com/Our18Q0h6X

Oct. 28, 2016:
- "At 11:48 a.m., Cohen spoke to Trump for approximately five minutes"
- "Beginning at 1:21 p.m., Cohen attempted a series of phone calls to Davidson, Pecker and Howard throughout the day"
- Hush money agreement for Stormy Daniels is finalized. pic.twitter.com/pOfIQD5Fyq

10:58 a.m.: Howard texts Cohen and Davidson: "Keith/Michael: connecting you both in regards to that business opportunity. Spoke to the client this AM and they're confirmed to proceed with the opportunity."

NEW: Trump spoke with Pecker and Cohen for eight minutes, the day after Access Hollywood tape.