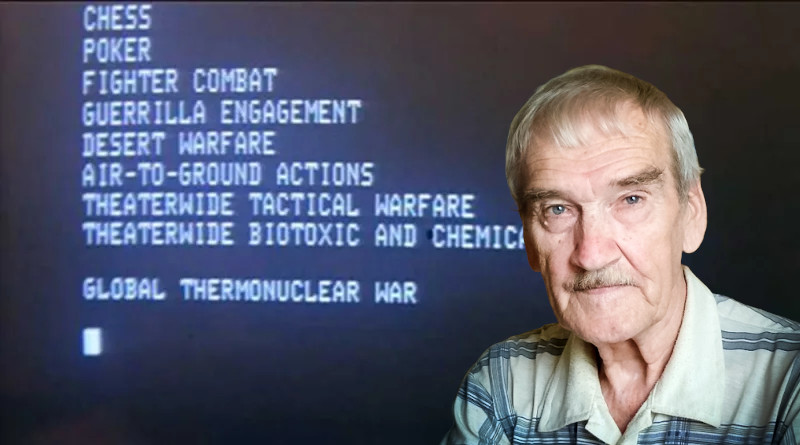 On September 26, 1983, the USSR's missile early warning defense system mistook the sun's reflection off a cloud bank for five inbound US Minuteman ICBMs and began to flash the LAUNCH warning at the Soviet Union's missile command: Stanislav Petrov, the missile commander on duty, ignored the computer warning and forestalled a nuclear war that could have effectively ended human civilization.

After the Cold War, Petrov would receive a number of commendations for saving the world. He was honored at the United Nations, received the Dresden Peace Prize, and was profiled in the documentary The Man Who Saved the World. “I was just at the right place at the right time,” he told the filmmakers. He died in May 2017, at the age of 77. Two new books about the Petrov incident and other nuclear close calls in 1983 (related to the NATO exercise Able Archer) came out just this year: Taylor Downing’s 1983 and Marc Ambinder’s The Brink.

And for Petrov Day, 2018, the Future of Life Institute gave a $50,000 prize to Petrov’s daughter, Elena.Her brother, Petrov’s son Dmitry, missed the ceremony because of visa delays. “That a guy can’t get a visa to visit the city his dad saved from nuclear annihilation is emblematic of how frosty US-Russian relations have gotten, which increases the risk of accidental nuclear war,” Max Tegmark, an MIT professor and cofounder of the Future of Life Institute, commented in a statement.

35 years ago today, one man saved us from world-ending nuclear war [Dylan Matthews/Vox]

Joan and Peter Foldes directed this incredible animation, titled “A Short Vision,” in 1956. The couple created the film — based on a poem by Peter — in their kitchen. It was funded by a grant from the British Film Institute’s Experimental Film Fund. From Wikipedia: Ed Sullivan saw A Short Vision in England, and […]

Climate change. Pandemics. Nuclear war. While these are undoubtedly devastating realities or possibilities, could they wipe out humanity entirely? Highly unlikely, writes Seth Shostak, senior astronomer for the Search for Extraterrestrial Intelligence (SETI) Institute. From Quartz: A century ago, the Spanish flu caused a staggering 20-50 million deaths, more than WWI. Still, the toll amounted […]