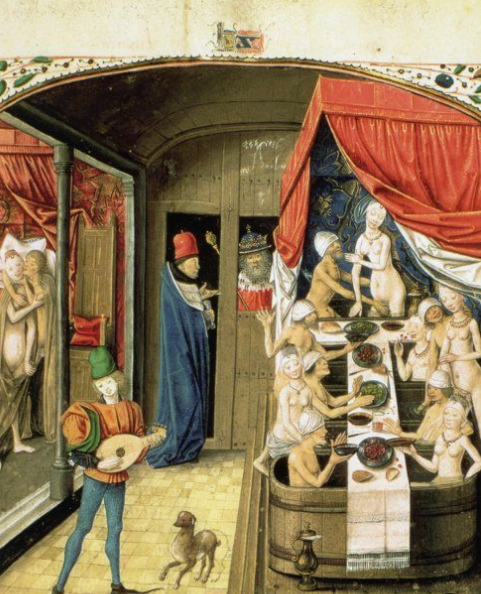 In an exasperated and delightfully sweary and very informative piece, Dr Eleanor Janega, the medivalist behind the Going Medieval blog ("It exists to explain the medieval influences on the every day world, and hopefully to get people through the every day grind of life in late stage capitalism") enumerates the luxuriant bathing culture of medieval Europe, from peasants to lords, who used soap and deodorant, scented their water, and patronized bathhouses that are European analogs to Japan's glorious onsens.

You, my gentle readers may have picked up on something here, and that is that our girls the sex workers be showing right TF up in the public baths. This meant that whether or not you admitted them made the difference between whether you were keeping a bathhouse or a brothel. Here in London, of course the Stews in Southwark were essentially brothels where you could also have a bath (and were largely owned by the Bishop of Winchester (as you do). Having said that, there were plenty of people who went to bathhouses just to go to bathhouses and by 1292 in Paris, there were at least 26 running that could give you just a bath.[4] Medieval people related to this very much as we do having a spa day, and medieval bathhouses often included steam baths along with big wooden tubs where you could sit down and enjoy a meal. In order to stand out from the crowd, the Parisian bathhouses would even employ criers to advertise themselves.[5]

And, I cannot stress this enough, this was just for regular ass people. Rich people? Oh, you better believe they were bathing, and often had dedicated rooms for washing unlike the poors. They also might go places simply to bathe, like Bath in England, or the thermal baths in Pozzuli in Campania, which was so famous it had a whole ass poem, De balneis Puteolanis written about it. They could also afford that nice soap and perfume and all that good stuff. In fact they were so into poncey baths that most medieval knighthood ceremonies involved having a scented bath.

So OK, clearly, fucking clearly medieval people bathed and were clean and into it. So why am I telling you all of this? Well the idea that medieval people didn't bathe is a persistent myth that some basics on twitter will come at me with at least once a week. Why is that?