8 hardcore flashlights you'll want on your next outdoor trip 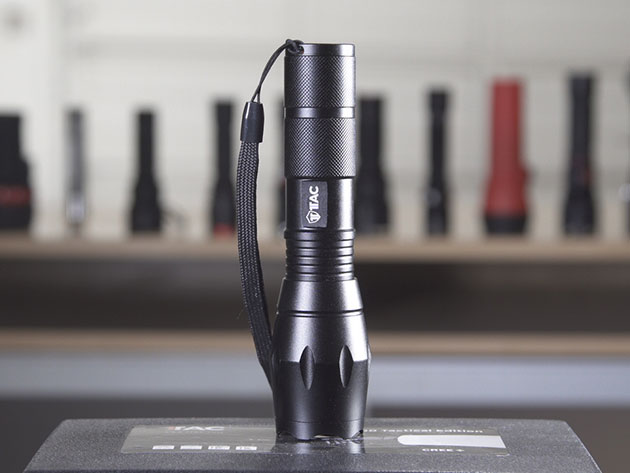 If there's one piece of gear that's essential for both outdoor trailblazers and urban homeowners, it's a good flashlight. And since it doesn't take much more dough to go the extra mile, you might as well get a great one. Here are eight super-durable flashlights and versatile lanterns that will make sure you're never in the dark. So much for the boogeyman.

The lantern can be folded down to the size of a smartphone, and the flashlight features five distinct modes, including a strobe effect that can stun potential attackers. Both are water-resistant, and together make a kit that's a lifesaver for any camp. Pick up the Bell + Howell Taclight Flashlight & Lantern Bundle for $25.99, a full 67% off the MSRP.

This portable unit puts out a big shine: Up to 1200 lumens, or 20% more light than a standard XML T6 LED. And durability? Not only is it waterproofed to an I65 rating, but it'll also still work whether that water is freezing cold or boiling hot. Get this 1Tac Professional Grade Tactical Flashlight for $47.99, a 14% discount off the list price.

Going off the grid or awhile? 1Tac's survival guide includes the TC1200, plus a wall charger, car adaptor, portable rechargeable battery, and emergency holster. Basically, everything you need to keep your path lit no matter where you walk. The 1TAC TC1200 Tactical Flashlight Kit is now $79.99, more than 10% off the original price.

This smaller cousin of the TC1200 is a perfect size and power level for home use, or an emergency glove compartment unit. It's got 3 brightness level to choose from and a long battery lifespan, though it comes with a wall unit to juice up the battery quickly. Grab the full 1TAC TC800 Tactical Flashlight Kit for $33.99, down 15% from the base price.

When disaster strikes, this gadget keeps you illuminated and informed long after the power goes out. The powerful LED flashlight doubles as an AM/FM/weather band radio, and you can even recharge your devices off the onboard battery via USB. Get this Emergency Multi-Function Radio & Flashlight for $28, a full 68% off the MSRP.

The 1,000-lumen light on the Vipers can be adjusted from a precision beam to a floodlight and can flash to produce a strobe or SOS signal. Add in the glass-shattering tactical head and you've got an invaluable tool for any breakdown situation. Get a 2-pack of Viper 1000-Lumen Tactical Flashlights for $29.99, a 75% drop off the retail cost.

Whether you're on the go or kicking back at camp, this light source can adapt. Adjust the light and cover settings to create everything from a flickering mood lamp to powerful work light, or collapse the body entirely and grab the handle for wide-angle flashlight mode. The Slide-N-Glo 3-in-1 Lantern is now $17.95, a 28% discount off the original price.

This duo comes with a handy storage case for long trips, where they can shine with up to a mile of range. Long battery life and the SOS mode provide an extra dose of security on the trail. Pick up a 2-pack of the UltraBright 500-Lumen Tactical Military Flashlight for $14.99, down from the previous sale price of $19.99 and 85% off the retail cost.