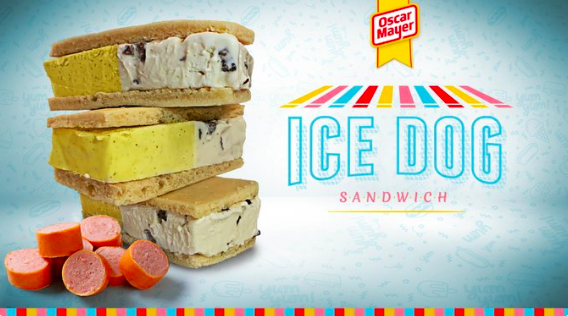 Things are getting weird in the world of ice cream. First, French's created mustard-flavored ice cream for National Mustard Day. Then, in response to that, Oscar Mayer created the "Ice Dog Sandwich".

Oscar Mayer, which is waging a Twitter war with French’s as we speak, teamed up with New York City-based Il Laboratorio Del Gelato to corrupt some perfectly good gelato with real bits of candied Oscar Mayer hot dogs, swirled with spicy Dijon Gelato, and “hot dog sweet cream,” a phrase that cannot be typed without gagging.

That unholy combination will be smooshed into hot dog shape, served on a cookie bun, and dubbed the Ice Dog Sandwich to mark the definitely not-made-up holiday of National Ice Cream Sandwich Day, aka August 2. That faux holiday is no excuse for this behavior, Oscar Mayer. The hot dog-flavored ice cream sandwiches will be bestowed upon the unlucky people of New York the week of August 12...

Who eats just mustard @Frenchs? Condiments were made for Oscar Mayer hot dogs. Say hello to the Oscar Mayer Ice Dog Sandwich - ? flavored ice cream, made with our better hot dogs, sandwiched with spicy mustard ?. Do you want to try this? Coming in August? #OscarMayerIceCream