Her Godzilla swimsuit cosplay floats and lights up in water 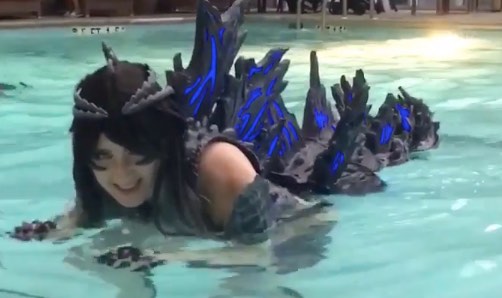 This amazing aquatic Godzilla cosplay with lights and flotation is the creation of Labinnak & Mangoloo Cosplays in Virginia. Wowza!

At IMGUR and Reddit, where I spotted this, Mangoloo shares:

The key to waterproofing cosplays.... a ton of plasti dip.

Anyways I built a Godzilla swimsuit cosplay for a waterpark convention called Colossalcon.

Then I used transparent foam that I airbrushed blue that I put waterproof tea lights behind.

The tail is essentially a pool noodle covered in tulle.

My goal was to get the tail to float and the pool noodle and all the tulle super helped.

I plan on making the Jaws Shark next for Colossalcon East.

Here is a video I have of my cosplay in water.

Godzilla cosplay FLOATS and LIGHTS UP in water

BTW, people were jerks about it, and here's how @Labinnak replied.

Someone actually told me that my "acting" was bad as Godzilla.
Me: *living the best life as Godzilla*

The biggest reason why I cosplay is because it is FUN. I love building cosplays, wearing cosplays, and even derping around in cosplay. pic.twitter.com/SgBOLWwGCd