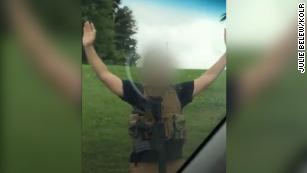 A man was arrested at a Missouri WalMart wearing body armor and carrying "tactical weapons" -- legal carry in the state. They're holding him while they figure out what to charge him with, if anything.

Officers responded to a call of an active shooter at the Walmart Neighborhood Market in Springfield, Police Lt. Mike Lucas said. But no shots were fired and no one was injured, police said. The man was pushing a cart and recording himself walking through the store with a cell phone when the manager pulled the fire alarm to notify customers to escape, according to CNN affiliate KYTV.

"His intent was not to cause peace or comfort to anybody that was in the business," Lucas said. "In fact, he's lucky to be alive still to be honest."

The facts are still to emerge, not least details of his actions while heavily armed in public. But the implication from the early reporting suggests that he's a provocateur, not a terrorist, that the "active shooter" report was false, and that it'll be tough making serious charges stick.

In any case, his behavior and the authorities' reaction to shows the sand is shifting under open-carry, at least the long-barrelled sort intended to intimidate people and provoke a reaction. A hostile police response is now incoming, even for the whites (though note that this guy was detained by an off-duty firefighter, pulling their own gun in public).

Consider this tweet, doing the rounds the last couple of days:

The answer is "leave, 'cause if someone calls the sheriff that saloon's gonna be full of holes."