Create your robot army with these Arduino and Raspberry Pi kits 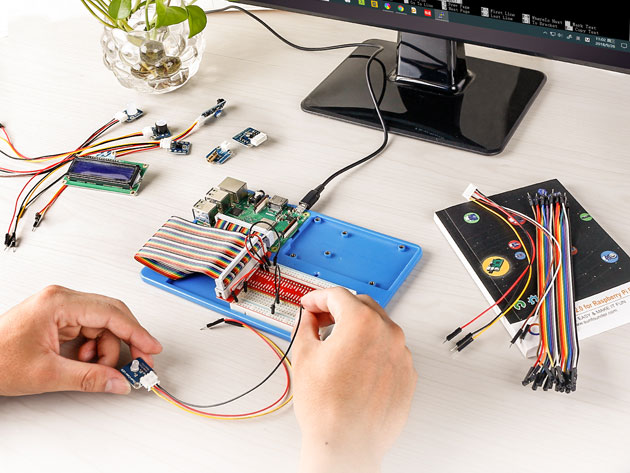 It's a great time to be a maker. 3D printers are on store shelves for anyone to buy, and coder kits like Arduino and Raspberry Pi are letting kids as young as 9 or 10 dive into the Internet of Things. Here are a few examples of our favorite tech toys, all priced low enough that even a mad scientist in training can afford them.

This workhorse printer is designed to get you creating right out of the box with an impressive dual-head system that allows you to print with two materials at once. Operation is clean and safe for even first-time students, and there are no stray strings on your design thanks to nozzles that cut off the flow of material before pulling away. Pick up the RoboxDual™ 3D Printer for $449.99, almost 70% off the list price.

Here's one toybox that won't ever run out of toys. Designed for kids but full-featured, this 3D printer gives you access to a catalog of blueprints and the option to upload your own inventions to a companion app. The Toybox 3D Printer Deluxe Bundle is now $314.99, more than 30% off the original cost.

Raspberry Pi systems are already a great introduction to computers and DIY gadget-making, and this kit makes that intro even more painless. The LCD touchscreen and multiple display modes allow you to surf the web your way, from scratch. Grab an Elecrow Raspberry Pi 3 Starter Kit now for $108.

If this were just a remote control car, the included wide-angle USB webcam would make it worth the price. But this infinitely tweakable car also comes with a Raspberry Pi board and Python code, which makes for years of tinkering. You can get the SunFounder Raspberry Pi Robot Kit for $139.99, down 6% from the list price.

Instead of talking to your plants, let your plants talk to the moisture sensors in this DIY electronics kit. It comes with a pump, water switch and all the components you need to make a failsafe irrigator for your houseplants. Right now, the Arduino Automatic Smart Plant Watering Kit 2.0 is sale priced at $69.

Easy to build and easy to use, this gadget is a great start to your robot army. Control it through your PC, or directly through dials that rotate the arm through 4 axes of movement. One simple press of a memory button, and you can program it to do a variety of repetitive tasks. Pick up the SunFounder Robotic Arm Edge Kit for Arduino for $54.99, a full 21% off retail.

The 30 modules in this pack can create laser pointers, moisture sensors and more with the lessons inside the included guide book, but the sky's the limit. There's also an ESP8266 WiFi module with a Crowtail interface that allows you to really unlock the kit's IoT potential once you've mastered the easy and interactive walkthroughs. Get started with the Crowtail NodeMCU Internet of Things Kit for only $89.

Forget RC cars. This robot lizard is an original way to learn robotics by way of the Sunflower Nano board and included software. Get your DIY Bionic Robot Lizard for $54.99, more than 15% off the list price.

Here's the perfect entry into Raspberry Pi's 3B+ model. You'll get the board itself, 37 sensors and three courses that teach you how to use all of them to their full potential, including home automation through Amazon's Alexa. The Complete Raspberry Pi 3B+ Starter Kit & Course Bundle is now $139.99, a 68% discount.

Arduino's full-featured electronics kit comes with the ultimate guide here: Six courses that offer hands-on projects and resources. By the end of the boot camp, you'll have not only a full understanding of DIY electronics but a cool robot or two to show for it. Previously sale priced at $109.99, the Complete Arduino Starter Kit & Course Bundle is now $89.99, 85% off the original cost.