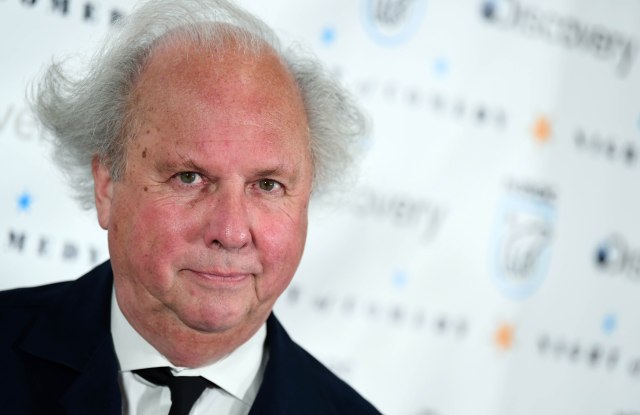 David Folkenflik of NPR News has a report today about how Jeffrey Epstein terrorized members of the press who sought to report on his activity, alternating between attempting to intimidate or buy off the media. One significant episode involved Vanity Fair, under former editor in chief Graydon Carter (pictured here).

The sexual predator and accused global sex trafficker's methods included a severed cat's head, and a bullet on a doorstep.

Vanity Fair under Graydon Carter was working on a story about Jeffrey Epstein's long-whispered-about sexual predation of young women and girls. Jeffrey Epstein found out, and wanted the story dead, so he applied various forms of pressure.

"He was torturing Graydon," says John Connolly, who was at the time a Vanity Fair contributing editor reporting on crime and scandal:

Soon after publication, Connolly says, Carter called to share an ominous development: a bullet placed right outside his front door at his Manhattan home.

"That wasn't a coincidence," Connolly says.

Even in the absence of any evidence Epstein was involved, Connolly says both Carter and he considered the bullet a clear warning from Epstein. Another former colleague, who spoke on condition of anonymity, recalls receiving an anguished call from Carter linking the bullet to Epstein. (NPR asked Carter repeatedly over the course of a week for his recollections of the bullet incident along with other elements presented here. After this story was broadcast and posted, his spokeswoman wrote to say Carter recalled the bullet appearing in 2004, not 2003.)

In 2006, federal authorities compiled accusations against Epstein in Florida. Connolly says he headed south to see if there was a story there for Vanity Fair.

As Connolly pursued interviews with women who had worked for Epstein, he says, Carter called him once more. The editor had found another intrusion, this time in the front yard of his Connecticut home: the severed head of a dead cat.

"It was done to intimidate," Connolly tells NPR. "No question about it." (Others who worked for Vanity Fair at the time said the cat's head was the talk of the office.)

In March 2014, society photographer Kevin Mazur captured photos of Ghislaine Maxwell at the 2014 Vanity Fair Oscar party in West Hollywood. It was hosted by Graydon Carter.

A Dead Cat, A Lawyer's Call And A 5-Figure Donation: How Media Fell Short On Epstein [NPR, photo: Shutterstock]

Fmr NYT reporter Landon Thomas Jr knew Jeffrey Epstein perhaps better than anyone else at the paper; he had profiled him twice and considered a source and something of a friend.

My story coming up on NPR

In this story, Maria and Annie Farmer confirmed to me for the first time that they spoke of their experiences on the record to Vanity Fair. Their account was cut from the story.

You also hear the voice of Virginia Roberts Giuffre, who was interviewed 4+ years ago by ABC NEWS. The network tells NPR it will broadcast the fruits of its investigation in coming months.

And Daily Beast's @kbriquelet has reported on this for years, along with colleagues at the high minded tabloid.

Yet much of press covered Epstein episodically and salaciously.

As both reporters told me, the Epstein scandal is fundamentally about power - its deployment and misuses as in #metoo, which changed how newsrooms handled accusers. Though not always.

Jeffrey Epstein served up tips for then NYT reporter Landon Thomas and charmed him into feeling they had something of a friendship. Epstein donated $30K at Thomas's request. His dinner party drew Stephanopoulos Couric & Rose. Epstein had confidence he could keep the press at bay.

Maria and Annie Farmer on being dropped from VF piece in 2003: "It was terribly painful. We hoped the story would put people on notice and they would be stopped from abusing other young girls and young women. That didn't happen. In the end, the story that ran erased our voices."

Virginia Roberts Giuffre on ABC sitting on her interview for four years: "I was defeated, once again, by the very people I spoke out against and once again, my voice was silenced. I could not believe that a formidable network like ABC had backed down and given in."