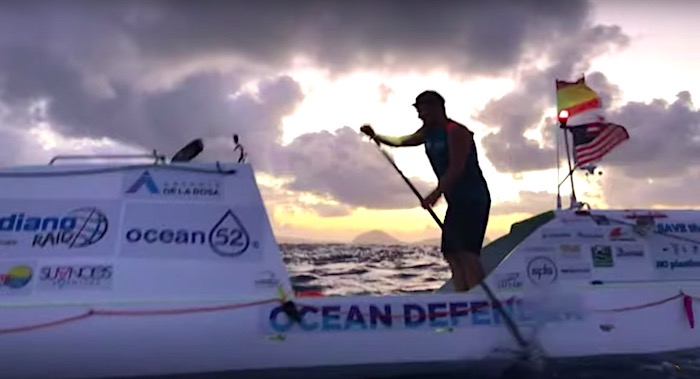 Antonio De La Rosa, from Spain, just paddled his way from San Francisco to Honolulu. It took the ultra-endurance athlete 76 days in his stand-up paddle boat, celebrating his 50th birthday by himself along the way.

He ate dehydrated food, using heated water, and sometimes fished. He paddled eight-to-10 hours daily and slept every night. But he was always tired because he woke up hourly to check on his gear.

He used a tracking device to record every minute of his journey and called it a record because he believes no one has ever done what he accomplished. It’s a record because “I certify it,” he said with a laugh.

Here's a video of him approaching Waikiki:

North Korea invites Russians to vacation there, pretending it's "safer than London"

North Korea must be hard up for cash, as they are now promoting themselves to Russians as a tourist destination. In their promotional pitch, they claim that visiting North Korea is “safer than an evening walk in London.” (Sounds like one of those exaggerated claims that Trump would say!) They also state that the guests […]

Living in a car: top 10 places to sleep

Ahle is committed to living in vehicles by choice, and her channel is a wealth of practical information for cardwellers, vandwellers, RVers, hobos, and vagabonds. Her tips for sleeping places are great.

Gorgeous shots from circumnavigating Australia, aka "The Big Lap"

Tom Rex Jessett and his fiancee Vanessa tricked out a panel van and drove all the way around Australia, a journey known as The Big Lap. We spent hours upon hours driving, walked on hundreds of beaches, Watched nearly every sunrise and sunset as well as ate a whole lot of tinned food! 35,000km later […]