Everblaze, book 3 of Shannon Messenger's 'Keeper of Lost Cities' series is so good 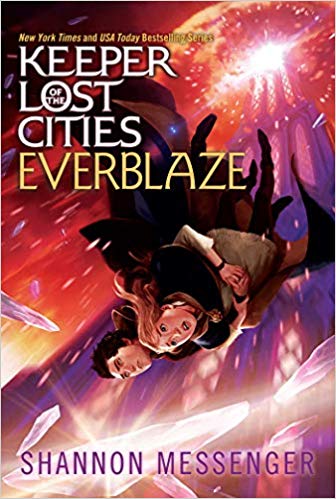 Sophie was abducted from her human family by elves who claim she is one. Unwittingly Sophie has averted genocide, provided a long-awaited hope for the future, and somehow convinced the elves not to ruthlessly murder the people who raised her.

Sophie was cruelly rejected by her elven Foster family and has suffered so many other indignities in the first two books it is shocking. In Everblaze, Sophie fucks some shit up.

Ignoring the ONE RULE they gave her about being a telepath, Sophie nearly starts an interspecies war by invading the mind of the Ogre King. This comes shortly after Sophie participates in the near destruction of the Elven capital. It looks like she is starting to blossom!

These books are fantastic!

Everblaze, Book 3 in Shannon Messenger's Keeper of the Lost Cities series via Amazon

I can not put down Shannon Messenger’s Keeper of Lost Cities series. Lodestar continues Sophie Foster’s waking nightmare. Sophie Foster thought she was human pre-teen. Sophie loved her family and her pet cat. She had no idea that in reality she was a genetically tweaked elf with super super-powers! Ever since she found out things […]