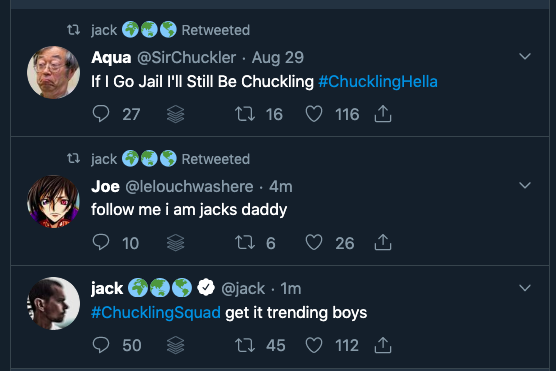 You can see the name of the group claiming credit.

A Twitter spox confirmed that what we were all seeing was what we presumed.

Yes, Jack's account was compromised. We're working on it and investigating what happened.

A few more screengrabs below. This went on for quite a while, and much N-word was spewed.

Some concerns and grim lulz below, from those of us who observed in horror.

Prevailing theory, not confirmed at the time of this blog post on Friday afternoon, is that the hacked @jack tweets were posted using Cloudhopper, a tool for for posting tweets by SMS (phone texting). It's possible the hackers who were tweeting from the account got access by spoofing the number linked to his Cloudhopper account to send tweets from his mobile phone.

In human English:@Jack's hackers had a Discord server (like a Slack for teenz). They linked to it from Jack's hacked account.

We’ve always known that 45 could be hacked #onhere and now it’s confirmed this can easily happen.

Someone found out the number Jack Dorsey linked to twitter for SMS and used that to post. “Cloudhopper” is how SMS posts show up because Twitter doesn’t give a shit about anything.

All of this doesn’t make me feel great for when Trump’s Twitter account is inevitably hacked and it starts World War III. Quite literally.

I mean, at least there's only 411 people who took this offer up? pic.twitter.com/vdB4NHDT42

i find this pretty worrisome tbh

Hacked @jack tweets were posted using Cloudhopper, which is for posting tweets via SMS. So best guess - hackers were able to spoof number linked to his account to send tweets?