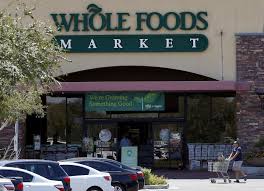 Amazon’s latest payment system for Whole Foods will require your own flesh and blood.

Amazon's new biometric payment project codenamed 'Orville' can reportedly scan your hand and process your transaction in less than 300 milliseconds. Good thing there aren't any security or privacy concerns to be had.

Amazon has been quietly testing the biometric payment technology in preparation to roll out at Whole Foods retail stores by early 2020.

“While a regular card transaction typically takes between three and four seconds, Amazon’s new technology can process the charge in less than 300 milliseconds,” reported the New York Post, a tabloid that broke the story on Tuesday:

Employees at Amazon’s New York offices are serving as guinea pigs for the biometric technology, using it at a handful of vending machines to buy such items as sodas, chips, granola bars and phone chargers, according to sources briefed on the plans.

The high-tech sensors are different from fingerprint scanners found on devices like the iPhone, and don’t require users to physically touch their hands to the scanning surface.

Instead, they use computer vision and depth geometry to process and identify the shape and size of each hand they scan before charging a credit card on file.

The system, code-named “Orville,” will allow customers with Amazon Prime accounts to scan their hands at the store and link them to their credit or debit card.

It’s accurate to within one ten thousandth of 1%, but Amazon engineers are scrambling to improve it to a millionth of 1% ahead of its launch, the source said.

“We don’t comment on rumors or speculation,” Amazon says on Tuesday.

Amazon will reportedly introduce Orville (or whatever it ends up being called) to hand-picked Whole Foods retail locations by early 2020.

Eventually, the super-fast checkout technology will be expanded to all the chain's US locations.