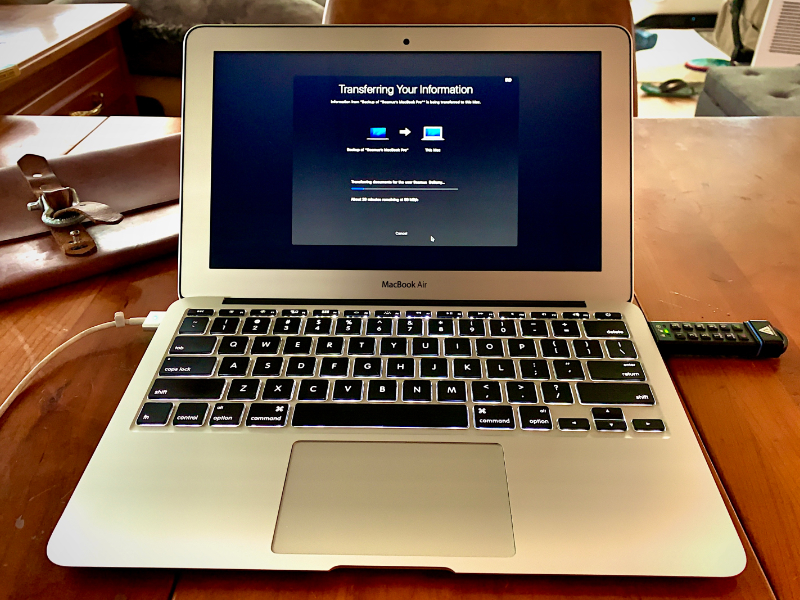 However, she’s rocking a 2012 11” MacBook Air: a hand-me-down laptop that I gifted her a few years back when I bought a new MacBook Pro.

It just doesn’t have the guts to work with high resolution video in a meaningful way. Happily, instead of having to discuss the purchase of a new computer for her, I was able to suggest that she switch over to using my MacBook Pro, instead. Of late, I’ve been doing most of my photo editing, tinkering video and other processor heavy work with the late model laptop issued to me by my employer. The only time I ever use my personal Mac is when I’m working on my novel or to transfer music or movies to my phone.

I spent the day setting my MacBook Pro—now my wife’s MacBook Pro—with all of her files and the software she’ll need to do what she wants to do. While that was getting sorted out, I turned my attention to the 11” MacBook Air. I’ve always loved the size of this thing and, despite the amount of space taken up by its sinfully large display bezels, I used to enjoy working on it. I honestly don’t think I’ve ever owned a computer that I’ve enjoyed using more. My missus isn’t as fastidious about keeping her hardware updated as I am. She’s been running Mac OS Sierra for eons now. Sadly, it slowed the little laptop down to a crawl, even while conducting the most banal of tasks. For shits and giggles, I thought I’d update it to Mac OS Mojave to see what happened.

What a difference a couple of year’s worth of operating system upgrades can make.

While it will never match the speed of my wife’s MacBook Pro, the 11” Air feels like a completely different system with Mojave installed. It’s as fast as I recall it being when I first purchased it, close to eight years ago. That’s a hell of a thing to discover with an old piece of hardware like this, but here we are I’ve installed all of the writing software I use on a regular basis, and a couple of basic photo editing tools. Not bad at all. I’m both surprised and disappointed to find that this old workhorse of a Mac loads most programs and completes tasks faster than the Microsoft Surface Go that I bought last year. The only place that the ‘Go outpaces the 11” Air is that it can be used both as a tablet and a laptop and the fact that it can be charged via USB C—a game changer for someone on the road as often as I am. The 11” Air’s eight-year old internal battery still holds a charge, but it ain’t what it used to be. And, to be honest, its battery life, even when it was new wasn’t so hot, either. But these are small complaints when you consider how good the Air’s keyboard feels to type on, how light it is (it’s actually lighter than my Surface Go and its beastly UAG protective case).

I’m planning on using this thing for a few weeks to see how it shakes out. I’ll be traveling for business and pleasure later this month. It feels like a good chance to see how well it works on the road, when finding a plug-in for its power adapter may not be possible a lot of the time. If it works out, I may well get rid of the Surface Go. It’s nice to have found workarounds that allow me to insert the tablet into my workflow, but it’s no replacement for rocking an Apple laptop. If the Surface sells, I’ll use some of the cash to replace the 11” Air’s ancient internal battery and upgrade its SSD from 128GB to 512GB: enough room to store all of my music with space to spare.