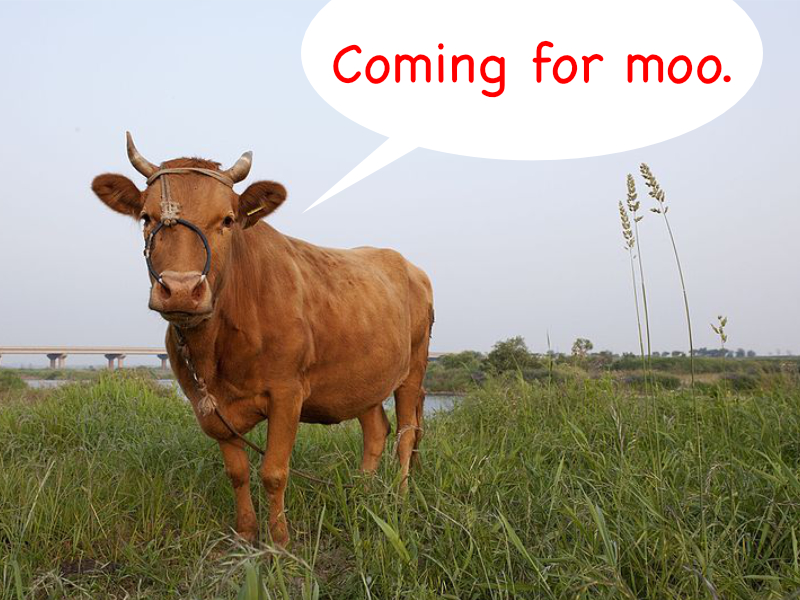 The so-called Islamic State no longer has the resources to go toe-to-toe with a well trained and equipped army, but its capacity for insurgency and guerrilla warfare is still on point. From The National Post:

SIL has been reluctant to use humans to carry bombs because of the group’s reduced numbers, so it has tried out a new tactic: Bovine suicide bombers.

Residents of Al Islah, Iraq, on Saturday said they had witnessed “a strange” sight: two cows harnessed to explosive vests roving the northern side of the village, according to Col. Ghalib Al-Atyia, the spokesman for the police commander in Diyala province.

The animals wandered into the outskirts of the community, and when they seemed close to houses, the bombs were detonated remotely, killing the cows, and damaging nearby houses, but not harming any people, Al-Atyia said.

In the colonel’s assessment, the attack signalled that ISIL, whose ranks were sharply reduced by the group’s four-year fight against Iraqi security forces backed by U.S. special forces, was resorting to unconventional methods since they lacked manpower.

In addition to the fact that an animal can’t choose to become a living weapon as it lack free will, a cow can cost well over a thousand dollars in Iraq—a small fortune by Iraqi standards. The loss of a cow to ISIL’s cause can mean no milk and a whole lot less meat for a village’s worth of people. The National Post notes that the cows were most likely donated to the poor man’s answer to COBRA by villages sympathetic to the so-called Islamic State’s cause.

There’s been an awful lot of talk about “cyber pathogens” and “cyber bombs” lately from the mouths of American officials discussing terrorism, and how we will vanquish it. President Obama mentioned “cyber ops” against Islamic State terrorists in one recent address. Today, we know a little more about what was behind last week’s cyber-hawkish hacking […]