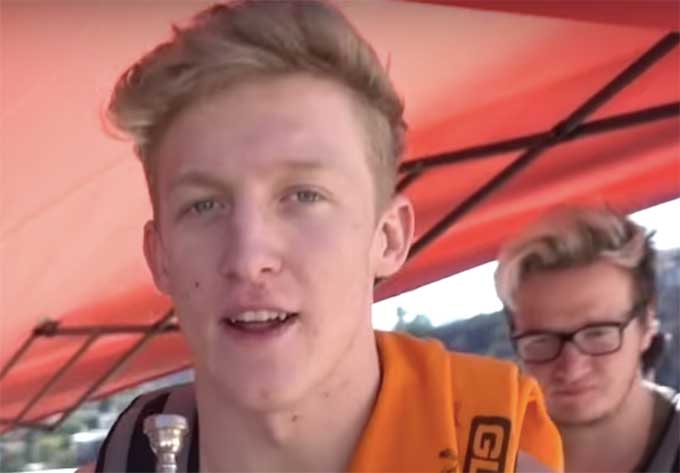 Famous Fortnite streamer Turner “Tfue” Tenney violated Twitch's rules against using racial slurs last night when he could be heard saying, "You guys fucking killed all the villagers, man. Y’all motherfuckers killed them niggas. You can suck my pee pee, man." This appears to be Tfue's third strike, which according to Twitch's guidelines automatically results in "indefinite suspension." But so far Twitch hasn't banned Tfue or issued a statement. After all, he's got 7 million followers there, making him the second most popular streamer on the platform. Kicking him off would put a big dent in Twitch's bank account.

Burglars fail miserably in attempt to steal a television

Three gentleman who tried to liberate a 75-inch television from the wall of a real-estate office in Spain were outsmarted by the cords attached to the appliance, as well an uncooperative door framee and a less-than-desirable coefficient of friction between the soles of their shoes and the broken glass on the sidewalk the building. Image: […]

Cannon Harrison, 24, was on dating app Bumble when he connected with a woman in his area who quickly bragged to him that she had just shot a “bigo buck,” a large deer, in the darkness. She even sent Harrison a photo posed with her prey and admitted that she had been “spotlighting,” taking advantage […]

Hey, remember those cops who ate a cannabis-infused chocolate bar that was supposed have been taken as evidence during a raid? Do you recall that they snarfed down their stolen snack while on duty and then proceeded to trip balls? Maybe the fact that they freaked out and called for police assistance–the sort of thing […]