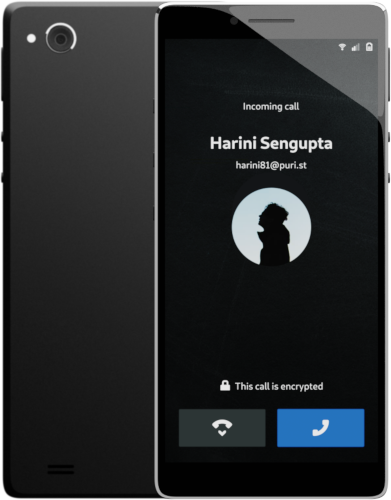 Purism (previously) is a company that crowdfunds free/open laptops and phones whose design goal is to have no proprietary software, even at the lowest levels. The company is best known for its Purism laptops, and I'm very fond of mine (it didn't end up replacing my Thinkpad, only because I'm addicted to the trackpoint for mousing, and trackpads give me raging RSI) (that said, getting any GNU/Linux to run on a current-model Thinkpad is so hard and results in such a rotten experience that I'm reconsidering whether to switch back).

For years, the holy grail of free/open hardware has been a competitive mobile phone, with software that respects your privacy and hardware that respects your autonomy (user-replaceable batteries ahoy!). The Librem 5 may be that phone: it runs a free/open OS called Pureos that's not based on Android or Ios, offers far greater user control without surveillance from the manufacturer, OS isolation from the notoriously insecure baseband module, hardware disconnections for networking/cam/mic, a replaceable battery, a mic jack, and a promise to release "lifetime" updates that improve performance and features of old hardware over time.

Purism is now shipping the first batch of its Librem 5s, as part of a planned set of manufacturing batches that iterate between runs to improve hardware and address manufacturing issues.

That's pretty exciting! The important thing will be how well this batch works, and what kinds of improvements come from Purism's experience with it.

Due to the high volume, growing demand for the Librem 5, and in the interest of openness and transparency, Purism is publishing its full, detailed, iterative shipping schedule. This expands on the existing commitment to start shipping in Q3 by defining specific batches, their features, and their corresponding ship dates.

Most companies keep their release and product plans secret right up until mass production launch, so they can avoid publicizing any setbacks or delays; but we have decided to bring our community and customers along with us for the Librem 5 journey, and have been transparent about our progress from the beginning. This means you have been able to celebrate along with us as we have reached milestones like shipping our devkit in 2018, the NXP CPU silicon issues we had to overcome, placing our first call in early 2019, sending our first SMS. You have been able to track our software progress directly from our public code repositories and watch live updates to libhandy, Phosh, Chatty, and the rest of our software. And we are compliant with, and submitting for, the “Respects Your Freedom” certification from the Free Software Foundation.