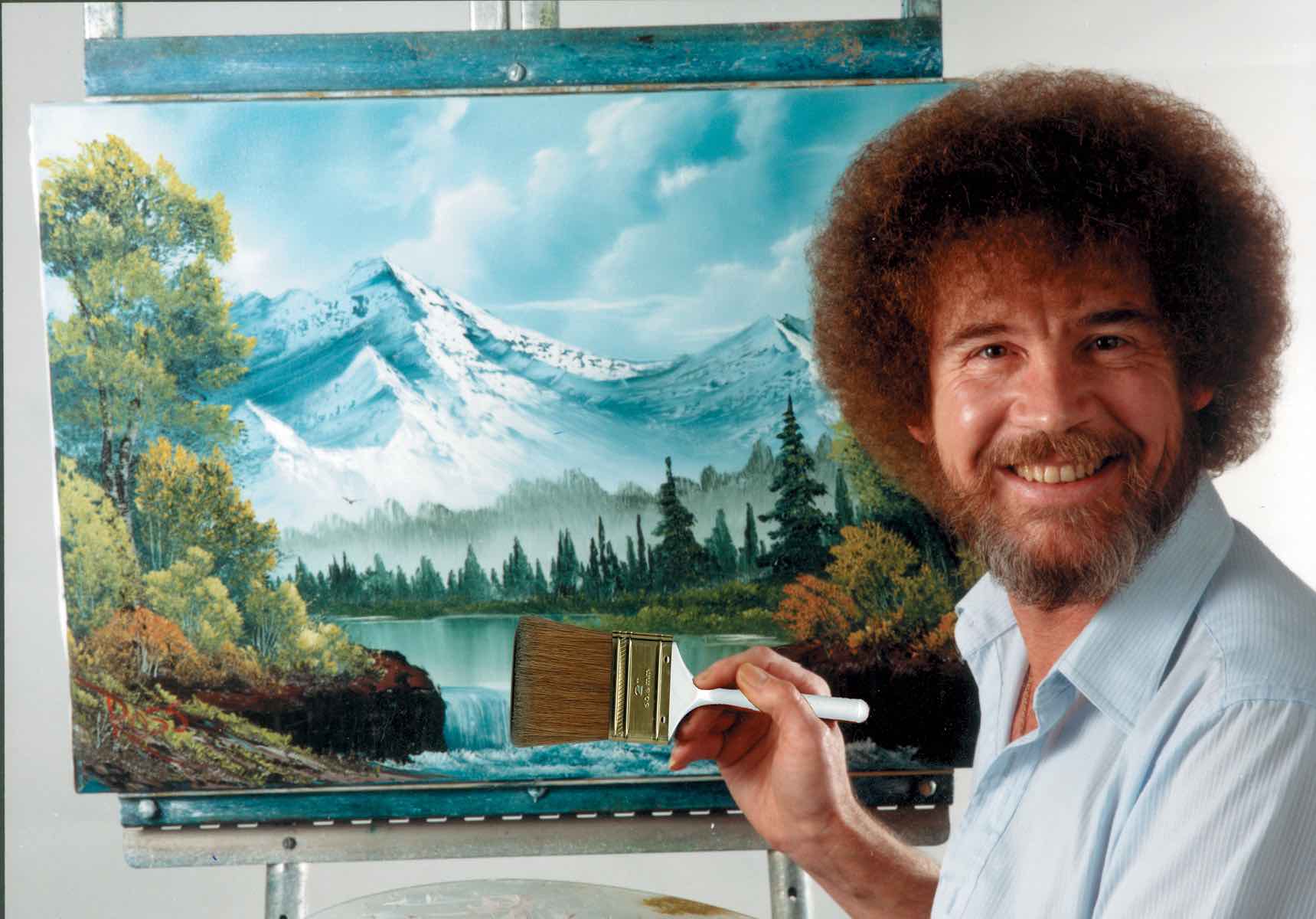 For the first time ever, a collection of original paintings by the late TV painter Bob Ross will be exhibited on the east coast. "Happy Accidents" opens September 10 and runs through Oct. 15 at the Franklin Park Performing and Visual Arts Center in Purcellville, Virginia (which is just a hop, skip, and a jump from the Bob Ross headquarters in Herndon, Virginia).

"…The exhibition will feature 24 original Ross paintings created on The Joy of Painting, the largest collection of Ross paintings to ever be displayed at a gallery. It will also be the first Bob Ross exhibition on the East Coast…

This past March, following a torrent of requests from Bob Ross fans, the Smithsonian's National Museum of American Art announced that it's including a collection of the artist's paintings, along with other items from The Joy of Painting (including the converted stepladder he used as an easel), in its permanent collection. Alas, the Smithsonian later said it had no plans to exhibit the new acquisitions. In April, Ross made his first museum debut when DePaul Art Museum in Chicago included four of his paintings in the exhibition New Age, New Age: Strategies for Survival…

If you can't make it to the show and want to see the entire The Joy of Painting collection, go check out all six seasons of his art at TwoInchBrush.

Related: It's not clear what the "Bob Ross Experience" is, but it's coming.

Previously: The "Boob Ross" sexy Halloween costume and Where did all of Bob Ross' paintings go?

Thanks to BB reader Akimbo_NOT for the tip!

Pop culture humorist Charles Phoenix (previously) has been busy this year. He's written a book: Holiday Jubilee is loaded with original eye-popping "test kitchen" recipes and over 500 vintage images, serving up an intoxicating, action-packed extravaganza of America's favorite seasonal traditions past, present, and future. Your imagination will be inspired and your spirit will soar! […]

If you've ever wanted to put on a one person show, and you're in or around San Francisco next weekend, Jane Morris' workshop is the one for you! Aside from being talented, intelligent, and one of the most delightful people to work with that you'll ever meet, she also helps folks put up amazing shows!

This Thursday, August 27th, at the PianoFight theater in San Francisco, Imran G and Red Scott present their new monthly comedy show #PhotobombSF, a one-of-a-kind show that asks comedians to answer for their their own Instagram, Facebook, and snapchat photos.